It's a Clark Terry double header.

More often than not, the word used to describe the music of jazz trumpeter Clark Terry is “happy.” His is the trumpet with a sense of humor. Clowning is his specialty. After all, perhaps the one piece most often associated with him is the classic “Mumbles,” his good-natured take on mush mouth scat singers.

If the Impulse reissue of his 1964 album The Happy Horns of Clark Terry and the 1967 release It’s What’s Happenin’ in their “2-On-1” series is any indication, while happy may be an accurate description, it is far too limited to characterize one of the great trumpeters of the era. Terry is a serious artist who knows how to play. He has a range exceeded by few, and if he can have fun while demonstrating that range, well that’s just an additional attraction. 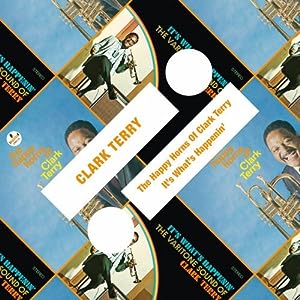 The Happy Horns of Clark Terry has Terry joining with a stellar crew. He plays both trumpet and flugelhorn, and is joined by fellow Ellington alum Ben Webster on the tenor sax and Phil Woods on alto sax and clarinet. Roger Kellaway plays piano, Milt Hinton is on bass, and Walter Perkins is on drums. The album shows off the trumpeter at his swinging best. He, Woods, and especially Webster complement each other seamlessly.

There are eight tracks on the album, including a Duke Ellington medley and two other Ellington pieces: “Rockin’ in Rhythm” features some nice interaction between the horns and “Do Nothin’ Till You Hear From Me” is a welcomed change of pace. Terry takes a bluesy solo that pushes the tune to another level. The medley, “Ellington Rides Again,” runs just short of three minutes and begins with a shout out to the “A Train” and includes “Don’t Get Around Much Anymore,” “Perdido,” and “I’m Beginning to See the Light.” It doesn’t leave much time for a lot of improvisation, but what is there is fine.

Keeping with the Ellington groove, there’s also a sweet version of Johnny Hodges’ “Impulsive” which has some nice work on the piano by Kelaway. Terry’s composition, “Return to Swahili,” is a jumping tune that features the composer on flugelhorn on top of some dynamic percussion from Perkins. Bix Beiderbecke’s “In a Mist,” has a more traditional swing vibe.

It’s What’s Happenin’ is a quirkier album. Joined by George Duvivier on bass, Dave Bailey on drums, and Don Friedman on piano, Terry plays the Varitone Electronic Trumpet. The Varitone made by Selmer is an electronic device usually used with the saxophone, but which can be adapted for the trumpet and gives the musician the opportunity to play around with different tones and create some doubling effects. It is either an opportunity for creative innovation or a gimmick, depending on the artist.

Terry, as you would expect, has fun with it. Indeed, from the opener, “Electronic Mumbles” to the final track, his take on the pop classical “Grand Canyon Suite,” a piece more likely to be associated with Andre Kostelanetz, he seems to be having fun with the whole album. He does a witty vocal on “Take the ‘A’ Train,” with some non-mumbling scatting, and a sweetish version of the saccharine “Secret Love.” You listen to this album and you understand why “happy” is so often the word used to describe Terry.

Now 91 years old, Terry has been in and out of hospitals and has had his right leg amputated due to complications from diabetes. His website/blog indicates that he is home and recovering, and it has announced a benefit concert as a fundraiser for Terry produced by Gwen Terry, The Duke Ellington Society, International Women in Jazz, Jazz Foundation of America, and Saint Peter’s Church-Jazz Ministry on Monday, April 23 at 7 p.m. at Saint Peter’s Church, 619 Lexington Avenue at 54th Street in New York City, New York. Over 30 musicians are expected to appear, and Terry himself hopes to appear via Skype.

Check Terry’s website for information about tickets and donations.