While controversy can push you into the public eye, it usually doesn't translate into staying power.

It's hard to make a list of musical acts from the '80s whose careers were guided and lifted by the just-emerging MTV without including the new wave Bow Wow Wow. The group was pieced together under the guidance of Malcolm McLaren, who also managed the Sex Pistols, and consisted of the Ants that were Adam and the Ants and then fourteen year-old Annabella Lwin. As with many of the bands that would find themselves at the top of the US charts in the '80s, they got their start in the UK.

All of their music has a signature sound backed with what is best described as an African-derived drum beat. Mixed with the unusual quality of Lwin's voice, the quirky, sometimes nonsensical lyrics gave the band a unique flavor, making for a very short-lived fifteen minutes in the spotlight. Best remembered for their standout hit, "I Want Candy" was actually their second top ten hit, coming on the heels of "Go Wild in the Country." Both came from their second album I Want Candy, and hit smack in the middle of their three-year run in the public eye. 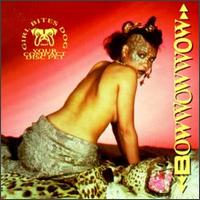 As with many bands that appeal to America's youth, no matter the time, their lyrics were controversial and often highly sexual ("Sexy Eiffel Tower" or "Aphrodisiac"). Their first label wouldn't promote their first single "C30, C60, C90, Go," because the flip side of the cassette-single was blank, and EMI felt it promoted piracy. They dropped Bow Wow Wow after the second single "W.O.R.K." The band went on to reach the peak of their success with their second release under the guidance of RCA, though the controversy was far from over. It didn't end with the band's lyrics however; they received even more attention when the 14-year-old Lwin was photographed nearly nude for an album sleeve.

There are fourteen Bow Wow Wow tracks contained on this We Are the '80s disc, including the aforementioned top hits. To the hard-core new wave fan it would be a disc full of memories, all in a very similar vein backed by a prominent drum beat. Admittedly back then my musical tastes rarely strayed from the mainstream, hair-metal and alternative, and my exposure to new wave consisted strictly of what would be seen during marathon viewing of MTV. It was my first time hearing many of these tracks.

In short doses it's a nice collection of songs from not only a short lived band but an ill-fated genre as well. There isn't a lot of distinction between the tracks and as the CD runs they tend to blend together almost to the point of not realizing the song has changed. But it still fun, and brings to mind memories of bright clothes and hair moussed and gelled to do things it would never do naturally. In many ways, I heard sounds and trends in the music that is now present in emo/pup-punk type bands such as Bowling For Soup. So maybe the genre wasn't so ill fated, maybe it just morphed with the changing times.

While sexual controversy can push you into the public eye, it usually doesn't translate into staying power, and with music and lyrics that were so quirky but still one-dimensional, it wasn't surprising the band fell as quickly as it rose. But for a short time they carved a niche and put their own personal spin on new wave music. Bow Wow Wow's We Are the '80s celebrates the band and the specialized genre.

'Bigger Waves' is remarkable because of its cool alt rock/punk blend of energy.