There's something supremely satisfying about power rock ballads, and that's how I feel after the last track ends -- satisfied.

Hope & Glory (Zoë/Rounder) is billed as Ann Wilson's first solo album, but with nine of 12 tracks featuring artists like her sister Nancy, Elton John, Gretchen Wilson, Rufus Wainwright, and Alison Krauss, among others, it's hard to think of this as truly a solo album. Sure, it's not an official Heart album (the band she and Nancy have fronted for the past thirty-odd years), but I don't think it's quite a solo album. That's okay; it's still going to rock your socks off.

The album is being released on Tuesday, September 11th, which is apropos considering how politicized the Al-Qaeda attacks on the World Trade Center and the Pentagon have become. There are several albums of protest music being released on that day, and this is one of them. Wilson has drawn on some of her favorite songs of the past forty years and put together a collection that includes interpretations of classics from John Lennon and Neil Young. It's not an overtly political album, but it does serve to highlight the relevance of these classic songs in the modern world. Wilson says, "I've been itching to make some sort of comment about our times, but I didn't want to do it in a way that was really abrasive and just shouting for the sake of shouting." 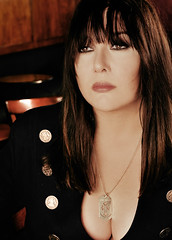 I have been a fan of Heart's music since I was a young 'un, but since I've been alive for only thirty of the forty years of music Wilson draws from, I am probably not the best one to judge the quality of her interpretations as they compare with the originals. This allows me to focus on the music for what it is, which is not a bad thing. I suspect that many of my contemporaries will be in the same boat.

The lead single off of the album is Led Zeppelin's "Immigrant Song." It's easily one of the best tracks on the album. It has a catchy hook and a fantastic lead guitar grind. At one point, I was reminded of Rage Against The Machine. Despite the classic rock roots, I think this has a chance of gaining traction with the modern rock crowd.

"Darkness, Darkness" (The Youngbloods) is another powerful song from the album. Despite the wailing electric guitar throughout, it reminds me of Appalachian tragic ballads. The song deals with the darkness of despair and depression, and is equally suited to the high lonesome sound of mountain music, as well as the gothic rock vocal that is presented by Wilson. "Darkness, darkness, be my blanket / Cover me with the endless night / Take away, take away the pain of knowing / Fill the emptiness of right now."

I would never have thought to pair Wilson's vocals with the sweetly pure vocals of Alison Krauss, but some how it works on "War of Man" (Neil Young). Perhaps it is because  Young has a similarly fragile sound. It also helps that they have the strong foundation of such a well-written song. With Krauss's vocals, the song is imbued with an ethereal feel that along with Wilson's strong voice enhance the message of the lyrics.

There are two songs on Hope & Glory I could do without. Elton John's vocals on "Where to Now St. Peter?" are jarring, although I can understand why Wilson chose that song for the album — it deals with the afterlife of a dead soldier. My issue with "We Gotta Get Out of this Place" (The Animals) is the disappointing chorus hook after the anticipation and build-up of the verses. Maybe it's the arrangement, or maybe it's a weak point transferred from the original, but it irks me every time.

The album concludes with "Little Problems, Little Lies," an Ann Wilson original. It is a fine contribution to the collection classic rock songs that she has used to reflect on modern times. Except for the references to modern tools like SUVs and cell phones, this could be the story of every young idealistic soldier who has come face-to-face with the realities of war and began to question his or her place in it. "Screaming hopeless questions / Dreaming 'bout my home / Till the chopper comes from heaven / To gather up my bones"

There is something so supremely satisfying about power rock ballads, and that's how I feel after the last track ends on Hope & Glory — satisfied.