A rip-roaring blast of rock from a bluesy young singer/songwriter.

Amanda Overmyer was, simply put, one of the most interesting contestants on the seventh season of American Idol. Her bluesy, Joplinesque wail provided an authentic blast of retro-rock on a program dominated by more technically polished voices. Upon her disappointingly early departure, I wondered what kind of album she would make if given the opportunity. Solidify answers that question with a resounding full-frontal assault of old fashioned, in-your-face, ass-kicking rock 'n' roll.

Overmyer sings the holy hell out of these twelve songs, all of which are her own original compositions. For all the "ballads are boring" bluster she displayed on Idol, there's a nice mix of slower tunes to compliment the rowdy stuff. In fact, album highlights like "Play On" and "Lay It Down" might've been exactly what Paula Abdul had in mind when she expressed a desire to hear Overmyer tackle a more tender, nuanced song. Her voice is always at the forefront, and she digs in with the fervor of a soul possessed by the music. The songs aren't all riff rock shouters, either. "Fight Like a Son," a proudly pro-military anthem, is a well-constructed pop tune with a strong hook. "Iroquois Lane" is an intriguing story song with an evocative lyric. The album closer "Pray" is a low-key bit of folk pop, with Overmyer accompanied only by acoustic guitars. 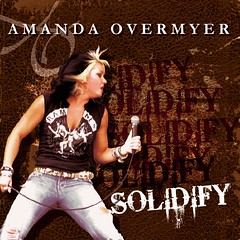 Her backing musicians give the album plenty of authentic rock bite. Producer Rocco Guarino cooks up a tasty stew that manages to stay mostly rooted in southern rock, while still sounding contemporary. Cozy Johnson, who used to drum for Black Oak Arkansas, sits behind the kit for most of Solidify and is a driving force throughout. On "Varmint Rifle," he downshifts dexterously from the hard-swinging boogie of the verses to the swampy, molasses-thick chorus. Brian Bundy handles most of the impressive bass work. Justin "King" Richard and Bartek Michael contribute most of the incisive guitar leads. In short, this isn't homogenized 'modern rock' with AC-crossover potential. This stuff is the real thing.

The reason I watch American Idol is for the rare occasion when someone who doesn't quite fit any conventional label manages to break through. When exciting talents like Taylor Hicks and Bo Bice make it all the way to the top, they are immediately hampered by the Idol production team. Albums are cranked out very quickly that generally remove the elements that led them to success. Amanda Overmyer deserved to stick around much longer on the show, but the good news is that she made an album that fails to compromise. I truly hope she continues making music for a long time. Solidify is readily available on iTunes as well as through her official website.