The chronicle of a European tour by a young band with a new record label and Kiefer Sutherland as their tour manager.

Music DVD Review: I Trust You To Kill Me

Connie Phillips January 8, 2007 Comments Off on Music DVD Review: I Trust You To Kill Me 107 Views

It is almost two-thirds of the way through this 90-minute documentary before Kiefer Sutherland explains the odd title — a phrase he is having tattooed on his arm in runes — I Trust You To Kill Me. He explains it as the purest and most consummate trust you can offer another, the confidence in them to take your life. And it is the same kind of whole-hearted faith that Sutherland has in Rocco DeLuca and the Burden that puts in motion the European tour chronicled in this film.

Though he is best known as an actor, receiving an Emmy for his portrayal of Jack Bauer on 24, Sutherland is also co-owner of Ironworks Records, and Rocco DeLuca and the Burden are their first signed artists. Sutherland serves as tour manager for the band and his label is backing the tour. The movie opens with clips of the band preparing for the tour and a strong focus on the music; however about midway through the disc the subject matter seems to shift dramatically. The movie becomes less about Rocco DeLuca, his band, and his music and more about the evolution of Kiefer Sutherland and his goals – career and personal. 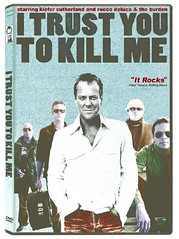 I Trust You To Kill Me is also the title of the band's debut album released on the Ironworks' label. The music is a heavy, introspective rock reminiscent of the great classic bands such as Pink Floyd, and Sutherland gives DeLuca high praise early in the film for always staying to true to his ideals and never comprising his art for a buck, an ideal he candidly admits he wishes he could apply to himself.

Early in the film we see clips of the band performing and recording and it's quickly established why the Ironworks duo stand behind DeLuca. The music is rich and full and the lyrics deep for someone so young. When they are met with a chilly reception in London, DeLuca lets it roll off his back saying he won't comprise what he does for approval. When he later asks if any newspapers reviewed their shows, Sutherland warns him to avoid the opinions of individuals. It seems to be all he needed to hear, because the subject of reviews is never revisited.

Throughout the tour we follow the group as Sutherland does all that would be expected of any tour manager and capitalizes on his famous face and notoriety whenever necessary to further the success of the band. He's not as organized as one might expect, losing his cell phone very early in the trip and showing up to a locked club to unload equipment. Late in the tour when the band discovers the club they are scheduled to play has an insufficient sound system, Sutherland is unreachable (though that may not be the case had he not lost his phone). It is DeLuca who solves the crisis, while again staying true to his convictions and refusing to play to what he calls a "supper crowd."

Just how unknown this band is and how new in the game Ironworks is becomes apparent at the first stop in England. The club owner misunderstood the label's request for a cheap hotel to be the inclusion of a warm-up band by the name of Cheap Hotel. Later in Ireland, a show they felt they had done the least to promote, they learn the cover charge is 20 euros (about $26) and fear they will be playing to an empty club. Sutherland talks the manager into waiving the cover charge, calls local radio stations until he finds one willing to interview him, and then takes to the street handing out tickets to any and all passersby. Many are more interested in his acting and 24, but the footwork pays off. In the end the club is not only full, but the crowd is enthusiastic.

Somewhere along the way, the focus seems to switch and the story becomes less and less about this young talented band, or the operation of Ironworks Records, and more about Sutherland's personal journey and what he learns about himself on the trip. He is shown on camera several times in the latter part of the movie reflecting on his past, often detailed in the tabloids, and what he's come to learn about himself. He also reflects on his relationship with his father. And whether he's talking about the large boxy case he carries because it reminds him of a similar one his father carried or explains he's always acted like a clown because it would make his father laugh, I was left with a sense that he is almost looking for respect for himself as well as the band he represents.

The screener I received did not include the extras which will be available on the street release. They include music videos for the songs "Colorful," "Gravitate," and "Swing Low," as well as a clip titled "How It Started" which shows footage of the band in Japan in 2005.

Overall I Trust You To Kill Me is an interesting look at both a young rock band as well as a young record label both trying to make a name for themselves. It does occasionally cross lines and digs deeper into Keifer Sutherland's personal tale, but that doesn't lower the quality. It is candid, honest, and quite enjoyable to those who like to see the inner workings behind the music scene. I Trust You To Kill Me will be available on DVD January 9.