Listening to Bob Brozman play guitar is a wonder. Watching him play is a revelation.

It was some time last winter when I first heard the guitar work of Bob Brozman. I had received his CD Blues Reflex and was left speechless by the sounds he was generating with his collection of Resonator guitars. Seeing him in action with them on his new DVD, Bob Brozman Live In Germany, I felt like I had never seen anyone play guitar before.

It wasn't as if he was doing anything brand new; in fact he was doing something so very old and simple. But it was what he was doing with those styles and how he was using his guitars to obtain his results – that was truly awe-inspiring. He had three Resonator guitars, a lap-top Hawaiian style, a ten-string ukulele from Reunion Island, and the bottleneck of a 1973 bottle of Mateus wine.

The National Company made Resonator guitars from 1926 to 1939, before the electric guitar gained wide acceptance. Its metal body and resonator cones allowed a player to generate a much louder sound for playing live and it was much beloved of many a blues player, including Robert Johnson, because of the sound it created when played with a slide.

With the refinement of the electric guitar with its pickups and volume controls, the Resonator guitar's future was guaranteed to be as bright as the dodo's. The only people playing them were people who were still wedded to recreating that original sound of the '20s and '30s. John Hammond, one of the leading exponents of that style of guitar playing still around, plays a Resonator guitar his father bought him in a pawnshop in the '50s that dates back to the '30s.

It's because of Brozman and his interest in Nationals that National-style guitars began being built again in 1989. The new company produces everything from copies of vintage guitars to new models, including a baritone with a longer neck, allowing a player to achieve a lower range than before. Working from designs Bob created, the company built a prototype for him, which he "road tested" before they put it on the market.

He's a solo performer; no drummer, percussionist, or bass player to keep the rhythm for him – just him, his guitars, his guitar cases, and the wooden box he's sitting on to keep the beat. The Resonators have such a forceful sound the tempo set by his strumming hand, or even the individual fingers picking out notes, enables the rhythm to be established and maintained for the whole song.

All the while his hands are busy with the guitar, his foot is stomping out the bass drum line on the hard shell of one of his cases, driving the song along like the pistons of an engine. Watching Brozman play is such a confusion of arms, legs, and other body parts in motion that it's quite a wonder a song actually materializes out of the confusion. 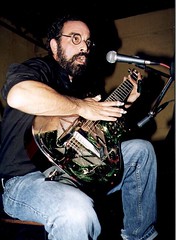 But not only do they materialize, they are amazing to hear. He's traveled all over the world playing with musicians from Reunion Island off the coast of Madagascar, to Hawaii, to Papua New Guinea, and back to the Mississippi delta. Everywhere he's gone, he's picked up musical information he incorporates into his own creations.

But instead of treating them like precious relics that are to be kept on museum shelves and not to be tampered with, he plays with them to create new sounds that have the old as a solid base. Even songs like the old Edith Piaf standard "La Vie En Rose" are made into something new while hanging on to the elements that make them recognizable and enduring.

The only other cover he performs on the whole DVD is the old Robert Johnson song "Love In Vain", which was made famous by those guys from England — the Rolling Stones. While he retains elements of the original song, his style of playing brings it new life and rescues it from its iconic status to make it a living, breathing blues song.

That's what makes his music so damn refreshing; not only is it some of the most alive and vital stuff going, it represents a gesture of defiance towards the pre-packaged, market-analyzed stuff that passes for popular music these days. Halfway through his set in this concert, he stops to teach his audience a quick lesson on the nature of rhythm in an attempt to break through the wall built up by conventional music that prevents people from truly feeling and hearing music anymore.

He proceeds to show that while most new music has only one beat to it, music like the old style blues, Hawaiian, African, and Indian have two distinct rhythms going at once in the same song. This is what gives those genres their vitality and ability to resonate an emotional chord in an audience. Being somewhat rhythmically challenged personally, I wasn't able to fully appreciate the distinctions he was trying to make, but I appreciated the incredible passion he was able to generate with his use of rhythm and melody while playing.

Recorded in a club in Cologne Germany, Bob Brozman Live In Germany is a study in how to make a great concert disc. Sure there is the advantage of working in a small venue, but it also looked like they had at least three handheld cameras on stage and two more in the audience for long shots. I don't know if they shot "live," editing while shooting, or took the raw footage and pieced it together afterwards.

Whatever they did, the results were wonderful. Close-ups when needed, wide angles when important, and amazing shots of his hands at work all over the guitar. I was a bit worried about the thinness of the sound, until I realized I hadn't set it on 5.1 surround yet, and then it was amazing. In fact, what is really good about this disc is they allow for all three types of systems, DTS, surround, and plain stereo, so no one is deprived of the best sound possible for their system.

There are two special features included on the disc that are absolute musts; one is an interview with Bob where you find out a great deal more about what he thinks of contemporary music and its so-called celebrities. In a nutshell, he considers most of pop music's stars lazy and the majority of pop music is designed to stop you from thinking with its monochrome rhythm.

The second special feature is a short guitar workshop where he runs through the wonders of open tuning and what a player can accomplish with it. He also goes into more depth about the different aspects of rhythm and why it is so important to a guitarist. I have to confess that I was completely lost for most of it, not being a player, but when I played it for a musician friend later, his comment was, "Well my life's changed forever now." I'll take that as a positive comment.

Listening to Bob Brozman play guitar is a wonder. Watching him play is a revelation as to how underused the guitar is by most people who play it. It's the difference between watching someone play "Heart and Soul" on a grand piano and someone else playing a Beethoven sonata. They are both played on the same instrument, but are universes apart in emotional and intellectual definition.