A glimpse at one of the Barenaked Ladies live shows.

The only thing that could soften the blow of having to miss the Barenaked Ladies concert at DTE Theater (aka Pine Knob) in Clarkston, Michigan last June, was to find out the band was releasing this CD/DVD package.

Barenaked Ladies: Talk to the Hand Live in Michigan is a CD/DVD package that gives key highlights of that concert. With fifteen tracks and a running time of approximately an hour, it was representative of only about half of what you could expect at a typical show, but what is there is key. It includes tracks from their recent Barenaked Ladies are Men ("Winds it Up," "Sound of Your Voice," "Angry People") while not forgetting their earlier, biggest hits ("One Week," "Brian Wilson" and "If I Had a $1,000,000")

I had a special perspective watching the concert footage, because the venue is one I love and frequent. It was almost as familiar to me as if I was watching a video of them performing in my own backyard. That atmosphere, intertwined with the well-loved songs, made the DVD an enjoyable experience, but the backdrop was merely a bonus. I would have enjoyed it regardless of where it was shot.

Any fan of the band is fully aware BNL's songs go through a growth process from CD to stage, and their onstage chemistry and showmanship make each performance not only memorable, but slightly different than the last as well as the next. It's that energy and chemistry that plays a big part of what sets this off from a typical live performance of some other band. 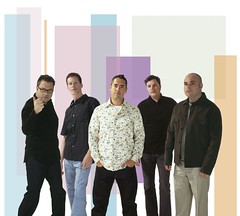 While the music contained in the disc includes their biggest hits and their most-loved obscure songs, it's hard to overlook what has been cut in the name of running length. The onstage antics, charming interaction between Ed and Steve, and improvisations are gravely missed. While the music is, of course, the heart of a show, those extra things that make it uniquely Barenaked Ladies are its soul.

The closest we get to seeing a glimpse of that soul is in the performance of the previously mentioned "Angry People" from the recent Barenaked Ladies are Men. In this number the entire band does an entertaining, choreographed fight scene reminiscent of the gang-fight between the sharks and the jets in West Side Story, right down to the snapping fingers. That being said, what has been trimmed isn't enough of a distraction to make this unworthy for purchase. Any fan will appreciate what is here: the music and the chemistry that exists between both the band members and the band and their fans.

The DVD also includes three bonus features: Backstage with the Ladies, Sound Check Featuring "Angry People," and Concert Photo Montage. The Sound Check feature—the rehearsal of the above mentioned dance number—is fun to watch and the interview piece is informative.

Also included with the set is the audio of the concert in the form of a live CD. The live versions of these songs are different enough from the studio recordings to make the disc worthwhile for the even the most devout BNL fan.

In keeping with the band's green philosophy, all of the packaging is recyclable and environment friendly. For more information on Barenaked Ladies, their releases, news and tour dates, check out their official website or their Myspace profile.