Your friendly neighborhood webslinger is back for another installment.

The statement, popularized in the first Spider-Man movie, holds just as true with the latest installment, Spider-Man 3, due in theaters this Friday.

For this go-round, director Sam Raimi, who also helmed the first two installments, has wielded all of his might, along with that of a plethora of computers, in order to try and give audiences the biggest and baddest Spider-Man movie yet. And, throughout the CGI-laden film there is not a single effect that looks cheesy or slightly undercooked. Raimi and his team are able to blend the CGI and live action elements into a dizzying array of punches, kicks, and exploding pumpkins. It’s a thing of beauty and all the time, effort, and money that put into it was well spent.

Sadly, the same thing cannot be said for the script and pacing of the film. The first two films in the series, despite their action and fighting, still had the feel of being small, intimate stories. That feeling is not present in this installment.

Picking up in Peter Parker’s (Tobey Maguire) life where the last film left off, Harry Osborn (James Franco), Peter’s one-time best friend, is still out for revenge, thinking Peter murdered Harry’s father (the original Green Goblin from the first Spider-Man movie). Harry, as the New Goblin, attacks Peter in the film’s first display of computer enhanced fighting. It’s an amazing display, though some of it happens way too fast for the eye to catch on the big screen.

Soon enough, our friendly neighborhood Spider-Man has other enemies to battle, most notably Flint Marko (Thomas Haden Church), Marko’s evil super-identity, Sandman (some Church, mostly CG), and Spidey himself. Early on in the film, an evil sentient black ooze attaches itself to one of Parker’s Spidey-suits, turning it black. The ooze, a symbiote we’re told by Peter’s professor, Dr. Curt Connors (Dylan Baker), changes Peter’s persona, making him more vicious and mean. 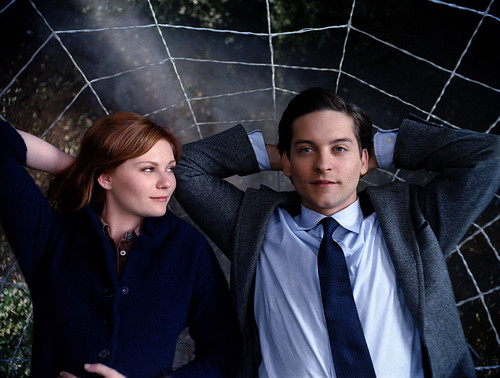 Herein lies one of the great problems of the film. Rather than going for dramatic weight at what should be important moments in the film, more often than not Raimi opts to play the entire thing for laughs. When Peter’s personality is affected by the ooze he does some bad disco moves walking down the street, and a Jim Carrey Mask-esque dance in a jazz club. Additionally, the obligatory Bruce Campbell appearance (which I was happy to see), simply went on too long and only added to the overly humorous tone the film set. The first two films, with their ability to mix huge, action-fantasy set pieces with a dramatic, serious, storyline, were two of the best comic book adaptations ever put on the big screen and helped to elevate the genre.

As Parker’s personal problems become more weighty, he becomes estranged from his girlfriend Mary Jane Watson (Kirsten Dunst). At the same time, a new upstart photographer, Eddie Brock (Topher Grace), fights Parker for a staff job at The Daily Bugle. As Parker’s feelings of moroseness and distress increase, he wears his new black symbiote Spider-Man suit more and more as it makes him feel better, and his attitude and problems in his personal life get worse. 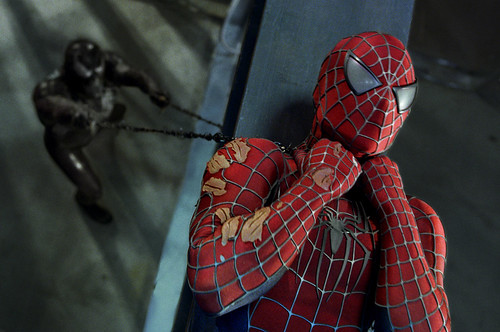 By the time Spidey is able to rid himself of the symbiote and tries to right his life, we’re nearly two hours into this behemoth of a movie. A movie that isn’t done yet. The symbiote does not go quietly into the night, instead binding with Eddie Brock to form Venom, and though Venom is listed in the credits to the movie (and looks like the Venom character from the comic book) I’m not sure that he is ever referenced as such during the movie. There simply isn’t enough time to get into it.

The weakest storyline here, the Flint Marko one, should have been dropped entirely. Even Sandman’s origin story falls flat. While escaping the police he stumbles upon some weird research facility that’s doing some kind of particle testing. The only reason the audience finds that out is because Marko hops a fence warning people about the facility. All of a sudden, Marko falls and is in the middle of a research project that’s about to take place. What the project is supposed to be doing is never said. Howexactly he becomes transformed is never said. The entire event is unclear. It’s possible that the DVD release will contain an expanded edition of the film that will fix these shortcomings, but they are glaringly obvious within the film as it stands. 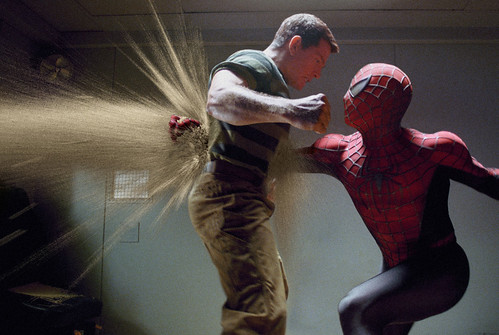 One of the best things about the first two movies was that the super-villain becomes that due to their own drive and ambition. They are willing to go beyond what could be, or should be, done in order to further their own pursuits. Marko just sort of stumbles upon his; it’s a far less compelling origin tale.

Spider-Man 3 is not a bad movie. It is however, a strictly average comic book, popcorn film. The first two films in this series elevated the genre, they led the audience to expect more and to want more. They established such a wonderful tone and precedent for the series, that a film like Spider-Man 3 feels like a huge letdown. Everything was in place for this movie to be just as good as the previous ones. Venom and the New Goblin’s interactions with Spidey are two of the best storylines the comic has to offer but, due to this film’s bloat and lack of gravitas it does not measure up.

Raimi wields great power here, but seems to have shirked some of the responsibility, much to this reviewer’s dismay.