It's the end of the trilogy - is there still any wind left in the sails?

Movie Review: Pirates of the Caribbean: At World’s End

What is there to say about Pirates of the Caribbean: At World’s End? It is a film that so totally and completely defies logic that to discuss it in logical terms seems foolish. It is a movie that actually seems to taunt its audience with its lack of logic, almost daring those who watch to point out some of the rather gaping plot flaws so that it may laugh back at us.

To question why Lord Cutler Beckett (Tom Hollander) is executing pirates and their friends at the beginning of the movie in order to get them to sing a hymn that does he-knows-not-what is silly. To query how Beckett even knows of the hymn is even more foolish. To wonder why some characters are dispatched with little to no fanfare after doing virtually nothing for two movies is fruitless. To ask why the Kraken died is to mistakenly assume the import of plot points from any of the previous films. To even begin to contemplate why Jack Sparrow has some sort of multiple personality disorder and whether or not the multiple personalities are always entirely a product of his imagination or in any way real requires a complete and total misreading of the film. 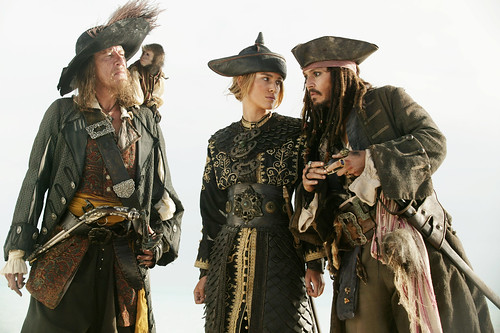 At World’s End begins soon after the final scenes of the last Pirates movie, Dead Man’s Chest. We find our heroes, save Jack Sparrow, in Singapore, attempting to steal both a map and convince fellow pirate Captain Sao Feng (Chow Yun-Fat) to part with both a crew and a boat. Eventually, they get their crew and are off to save Jack, who is “at world’s end” in Davy Jones’s Locker. Sparrow is soon found, the crew escapes the Locker and the movie begins (probably about 40 minutes into its running time).

Meanwhile, it turns out that Davy Jones’s (Bill Nighy) true love, Calypso, isn’t dead, but merely imprisoned in human form as Tia Dalma (Naomie Harris); although there are attempts to deceive pirates that it’s actually Elizabeth Swann (Keira Knightley), the audience is assured that it’s not Elizabeth. In plot contrivances, twists, turns, loops, and swoons that it would take far, far, too long to go into here, it turns out that the nine pirate lords who form the Brethren Court are going to meet, and during this meeting a faction will push for freeing Calypso, who was imprisoned by said pirate lords’ antecedents during the first such Brethren Court.

Cutler Beckett, however, is still on the hunt for Pirates, and using Davy Jones as his personal tool (Beckett has Jones’s heart and therefore commands him), helps put into motion the final battle (until the next movie) between the British fleet with the Flying Dutchman, and the pirate fleet with the Black Pearl. 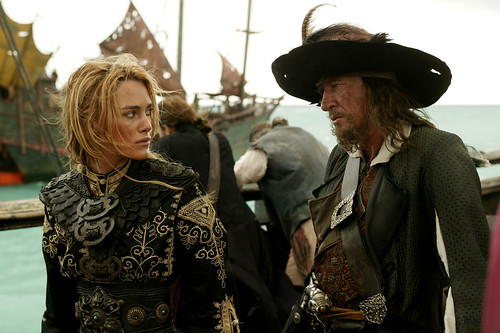 Throughout all this, Will Turner struggles with his relationships with Elizabeth and with his father, Bootstrap Bill. In order to free Bootstrap, Will would have to give up Elizabeth, something he is unsure he wants to do.

It’s a maddening, confusing maelstrom of logic, illogic, humor, and swashbuckling. And while I will not mount an attack on the plot holes, plot flaws, and dropped plot lines, it must be said that the film, weighing in at a mammoth 167 minutes, certainly ought to be about 30 or 45 minutes shorter. Not only would this tighten up several of the lagging areas of the film, it would require the complete elimination of some of the more weak plots. 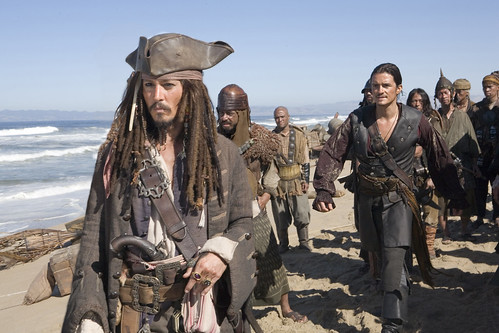 The actors are good in their roles, particularly Geoffrey Rush, who, as Captain Barbossa, seems to relish every single scenery-chewing line. His over-the-top performance, rivaling that of Depp’s from the first Pirates movie, is what the franchise is all about. Jack Sparrow seems to have received fewer good lines here and overall has less to do, but Depp still musters the energy necessary for the role, even if its charm is flagging. Keira Knightley, Bill Nighy, and Orlando Bloom all deliver solid performances as well (though the differences in color of Keira Knightley’s roots from scene to scene is disturbing, this is more a hair/makeup problem than an acting one). 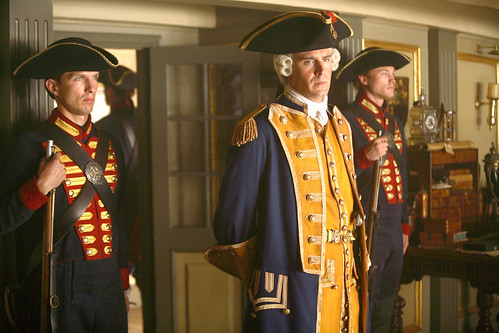 The supporting cast is even more colorful here than in the previous installments in the franchise, with Lee Arenberg (Pintel) and Mackenzie Crook (Ragetti) still leading the way. Naomie Harris remains fantastic in her role, and happily she is utilized to a greater degree here than in the last picture. Sadly underused is Jack Davenport as Admiral Norrington, who, though in few scenes, shows a depth of character lacking in others more often on camera in the trilogy. 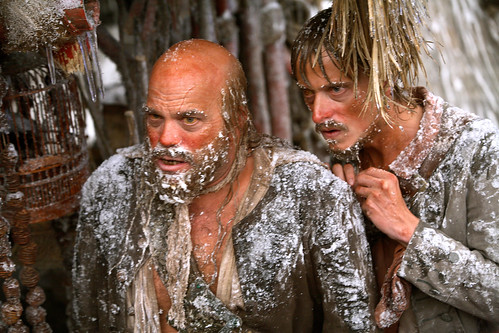 There is, quite clearly, fun still to be had in the Pirates of the Caribbean franchise. The last 40 minutes of the film, the climactic battle, prove that. In those 40 minutes the audience sees everything that makes the Pirates franchise great — the swashbuckling action, the humor, the noise, the very look of it all, are outstanding. The rest of the film proves overly-long and at times tedious. Even so, the ending somehow manages to salvage what would otherwise have been a disappointing trip to the movies and makes one hope for future installments in the franchise.

This may not be the most fun movie in the series, and it could have been better, but if you remove your brain (or at least the logical portion of it) it proves an enjoyable trip to the movies and an above-average summer blockbuster.