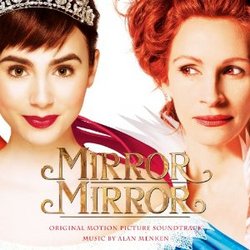 When a story as legendary as Snow White comes to life (twice in 2012), the stakes are pretty high to make it entertaining yet keep that fairy tale feel children love so much, that air of wonder, with the quiet rustle of pages for soundtrack. One would not expect so much snow from the Indian director Tartsem Singh, or maybe it’s completely the opposite: one should expect so much snow from him, snow covering everything in sight, and dancing in the background, to create that sense of wonder and timeless beauty, to echo that world known name, spoken in different languages and accents at bedtime – Snow White.

Mirror Mirror is a family movie, period. There is nothing scary in it, nothing sinister or dark (except the trailers preceding it), and the viewer knows it from the first few seconds of screen time. It is a comedic interpretation of the immortal Snow White by the Brothers Grimm, reworked from a curious angle of tamed feminism. There are a few meta-jokes for the parents but nothing as transcending generational boundaries or as universal as Toy Story 3 or Up. Still it’s entertaining, and very beautiful like last year’s Rio.

Mirror Mirror starts with a really cool cartoon telling a story of Snow White’s (Lilly Collins) birth, the loss of her mother, the demise of the King (Sean Bean) in the dark forest, and her sad existence with the Evil Queen (Julia Roberts). The scene where a cartoon Snow White caresses the mane of her late father’s horse surrounded by birch trees shedding snowflakes is sad and touching. When the cartoon prelude is over, a breathtaking shot of the kingdom and Snow White’s tower, where she has been locked away, opens the story. A close-up of Snow White fills the screen: the face of Lilly Collins is so pretty she is almost like an old school cartoon, every eyelash hand drawn in pitch black by a loving hand.

Mirror Mirror is a story of manipulation and control. The Evil Queen tells Snow White and everybody else she is a lunatic, locking her up in the tower. She feeds the girl dictatorial opinions about her inferiority, her inability to rule – every time she steps into the royal palace; Snow White believes her, like a true victim she doesn’t rebel – she wants to please, to be loved. This S&M mother-daughter abuse scenario will probably ring bells with a lot of people. It is difficult not to hate the Queen when she so lavishly despises the young girl, with her physical features making the aging woman sick with bile. Snow White will finally understand the role reversal here, of course, the machinations and manipulations; she will come to be her own woman, beautiful and strong.

But not until she witnesses the sorrows of the starving people who struggle to pay the ever-rising taxes while the Queen plays chess with her subjects acting as figures on the board (the lost party gets shot in the head out of hats that look like warships), enjoys fairy tale spa treatments (bird shit for facials, scorpion bites for Botox, and bee stings for silicone lip augmentation) and shows off elaborate dresses at lavish balls. The Queen is broke and needs to marry into money fast so it’s no wonder she can barely compose herself when a handsome young Prince (Armie Hammer), clad in his underwear alone, lands at the foot of her thrown. He had already been robbed by the Seven Dwarfs (they don’t look so small and innocuous in the beginning but I won’t spoil it for anyone) and had already fallen for the beautiful Snow White who helped him and his valet out of a sticky upside down situation in the woods. Nothing but good laughs will come out of Queen’s desperate pursuits of the Prince, but Julia Roberts with evil red hair and sparkling vulnerability under a facade of steel is a joy to watch.

The Queen has a magic mirror that is actually a waterway to a little wooden hut where she keeps her Portrait of Dorian Grey – a live reflection of a younger, fresher self, that tries to speak wisdom to her, but rarely succeeds. The Queen seems to get her magic powers from that parallel world, but they never quite succeed, and when she sees the Prince raving about Snow White’s beauty she only hisses out ‘Agree to disagree’, later poisoning him with ‘puppy love’ to her disappointment and the amusement of the viewers. Her magic rarely works, and that may be a real weak point of the film: the tale is not dangerous at all, there is no sense of menace or ultimate evil present, unlike in the Grimm’s original, dark and terrifying.

Tartsem Singh, who shot videos like REM’s Losing My Religion and movies like The Cell, The Fall and Immortals, loves a good visual. He also did the famous Pepsi ‘We Will Rock You’ commercial starring Enrique Iglesias alongside sizzling Britney, Beyonce and Pink, so his name suggests irresistible eye-candy, if anything else. Mirror Mirror doesn’t fail to deliver on the promise with beautifully choreographed action scenes, swooping landscapes, lavish set designs, colorful costumes and fun special effects. There is some playing with the reader’s expectations too: a monster that isn’t scary for all the right reasons; a wedding dance that is a mood booster and an instant reminder of where the director is from; a kiss of love, but totally reversed; a luscious red apple, but with a twist. Did I also mention that Nathan Lane as Brighton is funny, especially when he recalls his misadventures of being a cockroach?

The film is rated PG and opens on March 30. In the meantime children (and their parents) who can’t wait to taste the magic can go to Mirror Mirror official website to dress up Snow White into lavish dresses and change her haircuts as they please. Pure fun, just like the movie itself.

Austin Film Fest Film Review: ‘Ben is Back’ will Shake You Up

Ben is Back is one of those films that break rules and still entertains. Entertain …