Brothers and sisters, lend me your eyes so I may share with you the tale of brave Leonidas I, King of Sparta, son of King Anaxandridas II, descendant of Heracles, who led 300 Spartan warriors against the seemingly unending forces of Emperor Xerxes of Persia at The Battle of Thermopylae in 480 BC.

Xerxes sent forth messengers to all Greek city-states, offering gifts in exchange for their surrender and allegiance. Leonidas did not take the insult kindly, and in a breach of protocol, killed the messengers. In accordance with Spartan law, he sought permission from the keepers of the oracle to go to war. He was denied, which he knew spelt disaster for his people.

Although unable to rally the Spartan army, he skirted the law by gathering 300 warriors for a walk that coincidentally set out towards the mountain pass known as The Hot Gates, which is the only way Xerxes’ army could approach Sparta. While Leonidas is away and the battle rages on, Queen Gorgo works to convince the Spartan Council that the army needs to be discharged.

300 is an adaptation of the graphic novel written and drawn by Frank Miller, with colors by Lynn Varley. Miller was inspired to chronicle this historical event after he saw the film The 300 Spartans as a young boy. From his vision, co-writer/director Zack Snyder has created a magnificent ballet of violence and bloodshed that is truly exquisite to behold. It’s not a glorification, but rather a hyper-realistic representation of a necessary evil that good men are forced to practice to live free. Not since the films of Sam Peckinpah has killing looked so good on the big screen. 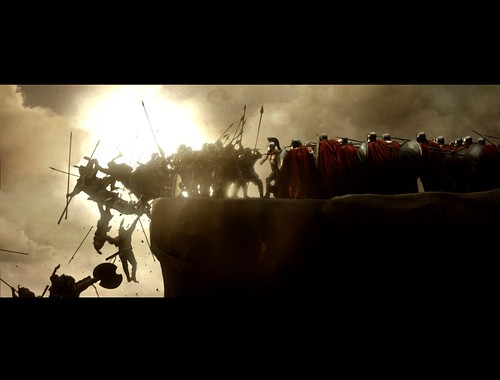 Leonidas, played valiantly by Gerard Butler, is a proud King whose men worship him. He leads from the front, at the point of attack, unlike many leaders and rulers ever since who have hurled commands from the safety of being out of range.

Leonidas’ military decisions have an immediate impact on him, as well as those who serve alongside, allowing him to fully understand the price to be paid, and a mutual respect to flourish. During one battle, an injured soldier tells Leonidas it was an honor to die serving him. Leonidas informs the soldier it was an honor living beside him.

As brilliant as all the effects work is, the story and performances are what lift the film into rarified air. A special kudos goes out to the actors’ training staff because the Spartans are extremely fit and every muscle is on display. The film is also augmented by the music of Tyler Bates, a fantastic mix that combines classical and metal elements, and includes the vocal work of Azam Ali. 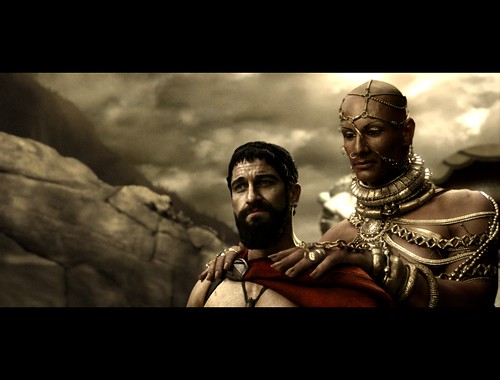 The villain Xerxes is the film’s one flaw. All his dialogue is dubbed poorly, taking the viewer out of the moment and removing the menace his character should have created. The effects don't work well in the scene where he is alone with Leonidas. He looks where Leonidas is supposed to be and not at him.

The bar for sword-and-sandal epics has been set so high, not even Icarus would attempt to reach it. Run with the speed of Hermes, and see 300 on the biggest screen with the best sound system available to better engulf your senses in its brilliance. I’m ready to relive it. Rare is the film that compels me to see it again on the big screen.

Trailer for Windows Media and Quicktime.

Solace in Cinema offers a comic-to-screen-comparison for fans.

For those interested in learning the story of the event, read Herodotus's Histories.