The death of BBC radio giant John Peel is beginning to sink in – the loss is starting to take shape. The Glastonbury Festival new bands tent will be renamed the John Peel Stage in tribute:

“It’s very appropriate because it’s all the sort of music that John would have chosen,” Glastonbury founder Michael Eavis told BBC Somerset Sound. 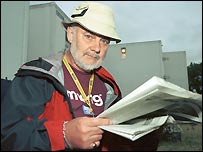 Eavis recalled Peel’s huge influence on the festival, attributing The Smiths’ landmark 1984 performance to the DJ.

“He chose a band and he made it succeed,” said Eavis.

Eavis recalled first meeting John Peel at the age of 18, and the friendship that developed over the years as Peel became the BBC’s Glastonbury guru.

“He was the lad that always knew which band was going to make the grade,” said Eavis.

In addition, the BBC News website received 30,000 e-mails from users paying tribute to Peel in the hours after his death was announced on Tuesday afternoon.

“He put a huge amount of energy into listening to the sackloads of stuff he received with a curiosity and an appetite that never seemed to diminish,” said Eno.

“He didn’t deal in celebrities for their own sake. He found beauty and interest in ordinary people. He was a real democrat.”

Thom Yorke said: “Whenever I was losing inspiration, I would listen to the show and I was back on track.”

“He played one thing every show that changed how you thought about that style of music.”

….Radio 4 producer Chris Berthoud, who led the team which set up Peel’s Home Truths programme, said: “John was an exceptionally talented presenter, and one of the nicest men I’ve ever met. [listen to the Radio 4 tribute here]

“I don’t think I’ve ever laughed so much as when I was with John – nor have I ever been so impressed by a person’s handling of extremely sensitive interviews. ”

“He was a pioneer in his own right,” said Osbourne. “If it wasn’t for John Peel, Black Sabbath would never have been played on the radio. He was a good guy.”

Mercury Music Prize winners Franz Ferdinand paid tribute to the broadcaster by playing a version of Peel’s favourite song, The Undertones’ Teenage Kicks, at the end of their set at the Manchester Apollo on Tuesday.

And a user contacted the BBC News website to report that ex-Smiths guitarist Johnny Marr joined Neil and Tim Finn on stage at the Liverpool Empire to play Teenage Kicks in Peel’s honour. [BBC]

BBC has open comments in tribute to Peel here. They have also compiled a pictorial with audio on Peel’s 12 favorite bands here – great list, some are obvious, some not.

Lastly, the Beeb has a moving and passionate look at Peel’s relationship with the music:

John Peel gave big breaks to more bands than anyone else in the UK music industry.

From Pulp and The Smiths to The Undertones and The White Stripes, he discovered some of the most popular and influential acts of the last few decades.

With extremely broad tastes, he championed all forms of alternative music and was one of the first to give punk, reggae, hip-hop, techno and drum ‘n’ bass exposure.

….Some, such as Blur, even performed at his home, Peel Acres, where he took to recording his shows.

U2, Nirvana, The Velvet Underground, Roxy Music, Rod Stewart, Pink Floyd, The Sex Pistols and T-Rex are among the others he helped introduce to the public.

….When he began broadcasting in the mid-1960s, the hippy era was in full swing and his Radio London show The Perfumed Garden was essential listening.

His playlist included The Doors, Pink Floyd and Jimi Hendrix, and he got the first play of The Beatles’ Sergeant Pepper’s Lonely Hearts Club Band.

….Peel said the early 1970s were “kinda boring” – except for Roxy Music – before punk exploded at the end of the decade and he became a hero for another scene.

Peel is best-known for loving and championing The Undertones’ song Teenage Kicks. He said he could not hear the punk anthem without bursting into tears.

….And he said he would like the song’s line “our teenage dreams so hard to beat” on his tombstone.

The Sex Pistols, The Ramones, The Buzzcocks and The Clash were among other bands featured on his shows, often mixed with reggae and other styles.

He also helped usher in the next generation of rock artists such Joy Division and their later incarnation New Order, plus The Fall – who recorded a total of 24 Peel Sessions.

….With his roadshows, he took his record collection and favourite bands to nightclubs and colleges around the country, often with promising unsigned local bands on the bill.

If he liked them, it is said, he would give his DJ fee to the local band – to the annoyance of his wife.

….Peel said he fell in love with The Smiths because he could not work out what their influences were – something he always looked for in a band.

He championed their first single, Hand in Glove, in 1983, when they too recorded their first Peel Session – but the song failed to reach the chart.

More than 20 years later, The Smiths are regarded as a seminal British band.

He also gave an early session to Nirvana, in 1989, and a more recent discovery was The White Stripes. Peel was in a Dutch record shop when he saw their first CD on import and bought it on a hunch.

“People say, what’s gonna be the next big thing?” Peel once said. “But the pleasure for me is in not knowing. I like to be taken by surprise myself.”