In a case of exquisitely well-delivered poetic justice, actress and insolent repeat offender Michelle Rodriguez is facing stiff new penalties for violating an earlier probation back home in Los Angeles when she was arrested for drunk driving last December in Hawaii.

She doesn’t seem to mind girl jail all that much, though. In an interview, the Girlfight and BloodRayne star told People magazine, “I’m a gypsy. I can see beauty in a jail cell.”

Do tell Ms. Rodriguez, what was her name? 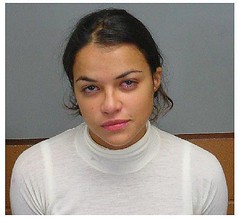 Ms. Rodriguez, a former star (her character was killed off earlier in the season) of the hit TV series Lost, was sentenced to 60 days in the LA county jail, in addition to a 30 day stint in alcohol rehab, and 30 days of community services that will include time with Mothers Against Drunk Driving victim impact panel and the city’s hospital and morgue program. 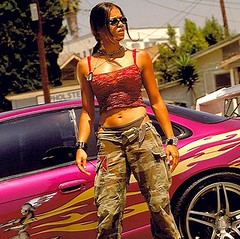 These new penalties stem from a previous arrest for DUI in two separate incidents in the L.A. area in 2003. Rodriguez served community service, 48 hours in jail, and received three years probation for those violations; a probation which she then violated with her drunk driving arrest in Kauai on December 1, 2005 while on location for Lost.

Ms. Rodriguez had her probation extended an additional two years as part of the judge’s sentencing, and she’ll likely violate that as well. Why my bad attitude? I resent people who seem to think that because they are celebrities that this somehow makes them above the law. 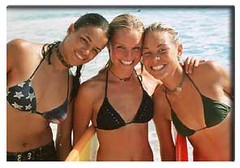 How will Michelle spend her 60 days in jail? Most likely the same way she spent the 65 hours she served in Hawaii: “drawing pictures for everybody on their shirts. Writing poetry. And singing show tunes with the girls.”

When asked why she chose jail time over community service in Hawaii, her response was that it “was more convenient to my business … do I wanna live in Hawaii and do community service? Heck yeah, who wouldn’t? Sit by the beach, cleaning up the beach, lounging, it’s great. But at the end of the day I have to pay my dues and I have to work as well.”

Now she gets to do both: two months under lock and key AND community service. Lucky girl.