As jury deliberations continue in Santa Maria on the fate of Michael Jackson, the erstwhile King of Pop, who if convicted on any of the ten felony counts against him would likely end up eating lunch with Charles Manson and Juan Corona in the Protective Housing Unit of California’s Corcoran State Prison, tension mounts among the hardcore Jackson fans, who appear to sweat the verdicts almost intensely as Jackson himself.

And the lead loon of the Jackophiles holding court daily outside the Santa Maria courtroom is 18 year-old B.J. Hickman from Knoxville, Tennessee, who stepped off a bus the very first day of Jackson trial in October and has been a very vocal and visual Jackson supporter — and nemesis of media figures he views as unsympathetic to MJ — ever since. 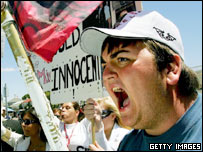 Hickman says he was inspired by Jackson’s words in the track “Will You Be There?,” released 14 years ago, “In our darkest hour, in my deepest despair, will you still care? Will you be there?”

”Michael Jackson has been here for us, so we have to be there for him,” he said. “He has helped so many people all over the world. He is the greatest.”

“I believe Michael Jackson has been wrongly accused,” he told USA Today. “If he was Paul McCartney, this wouldn’t be happening. If he were white and not black, this would not be happening.”

“Michael Jackson has given so much to the world. He is music, and it’s not possible that he is guilty, regardless of what the jury says. He will always be a star to us,” Hickman announced to the Miami Herald.

Hickman gets up at 4:30 a.m. each trial day and arrives at the courthouse at 6:30 a.m., then waits another two hours for Jackson to arrive. Hickman yells “Stop the lies! Michael’s innocent” and waves a giant “Michael-Jackson-is-Innocent” poster.

Just before court concludes for the day at 2:30 p.m., Hickman sets his poster outside the wire fence, standing on a stepladder, with an umbrella against the summer sun, waiting for Jackson to leave the courthouse.

When Jackson gets into his black SUV, Hickman collects his things and hurries to the corner to greet the car as it exits the complex.

To fund his vigil, Hickman works as a clerk at a local mall and on a ranch on the weekends. He will stay in Santa Maria until Jackson ”is found innocent” and then move to Los Olivos to be closer to Jackson’s Neverland estate.

But Hickman doesn’t just support Jackson, he actively taunts prosecutors and reporters he views as anti-Jackson, and Court TV anchor Diane Dimond, who has reported on allegations of child molestation against Jackson since 1993, is in the center of his bull’s eye.

Yesterday, Hickman was served with a temporary restraining order which requires that he stay 20 yards away from Dimond at all times. He is banned from communicating with her in any way until a June 29 court hearing.

“Every day since early in the Jackson trial he comes to court and yells,” Dimond wrote in her application for the order. “He incites others to threaten me harm. He posts incendiary messages on various Web sites. I believe he wants people to attack me.”

The day before he had interrupted her broadcast, screaming, “Burn in hell, Dimond, you bitch!”