Michael Jackson Trial: The Housekeeper Did It

I have had another epiphany regarding Michael Jackson’s face, by the way: it looks like what happens to a carved pumpkin about a week after Halloween – it caves in on itself and can no longer support its own weight. 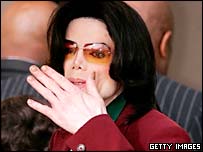 In the latest developments, today, with the jury having the day off, Santa Barbara Superior Court Judge Rodney Melville set a March 28 hearing to decide whether jurors can hear about past sex offense allegations against Jackson, a potential bombshell involving accusations of molestation made against Jackson by another 13-year-old, which were settled out of court for a reported $23 million in 1993. The prosecution wants to call the ’93 accuser to testify – the defense, on the other hand, does not.

Judge Melville also dismissed a motion for a mistrial brought by the defense on the grounds that the former Neverland housekeeper who testified on Thursday mentioned the name of the ’93 accuser. The woman, Kiki Fournier, who worked on and off at Neverland from 1991 to 2003, told the court how the singer had a series of close friendships with ten boys including Jackson’s current accuser, his brother and the ’93 accuser. She also said “children appeared intoxicated” on three or four occasions, though she never saw Jacko give alcohol to a minor.

In addition, Fournier testified that Jackson let kids run around wild in the mansion (like Macaulay Culkin in Home Alone – hey, Culkin WAS one of Jackson’s boy pals). “Neverland became like Pinocchio’s pleasure island without the parents,” she told the jury. “He did let them have a free hand. They could get pretty rambunctious.” And, “With the absence of an authority figure, these children became wild,” she said. Fournier added that children at Neverland were allowed to eat whatever they wanted, stay up late and spend their time playing video games or watching movies. Calling Nanny 911!

Under cross-examination, Fournier said the accuser and his brother had gone through their guest room “like a tornado” toward the end of their stay in 2003. “They tore it apart.” She added that she had found broken glass and spilled drinks in the room.

Today, Melville also ruled that the prosecution could subpoena the entertainer’s financial records. He said they would not be opened in the trial unless testimony made them relevant. Testimony resumes on Monday. Big boys don’t cry.