Michael Jackson Trial: Is His Body Trying to Tell Us Something?

As the jury returns today for its first full day of deliberations in the Michael Jackson trial, contrary to what his spokesperson Raymone Bain said on the matter, the King of Pop clearly IS “falling apart.”

Jackson visited the emergency room of the small Santa Ynez Valley Cottage Hospital near his Neverland ranch yesterday for five hours for treatment of the back problem that has plagued him throughout much of the trial, and precipitated the infamous “jammies” appearance back in March. 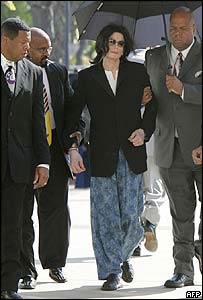 Comedian and Jackson pal Dick Gregory said Jackson also went to Cottage Hospital last Thursday to obtain IV fluids to alleviate his dehydration. Gregory said, “When you are under stress for 12 months, for 18 months, no one can understand but the person going through it. He was so dehydrated I thought he was developing kidney stones. You can’t drink enough water while you are standing in court.”

All of that coupled with Jackson’s extremely wan, gaunt and frail appearance of late would seem to indicate that he is not responding well to the stress of the situation.

This rather alarming set of affairs leads me to speculate: Would Jackson simply fade away if he is found guilty and required to do prison time, or would he rally and strengthen just to “show them? Recall that Jackson is responsible for three children of his own.

Does an innocent man cave under pressure such as this, or does inner certainty of innocence buoy the falsely accused? In other words, is Jackson’s collapse an indication of guilt of some kind? Is his body telling a truth his mind can’t or won’t?

I don’t have the answers, just the questions.