Comedian-actor Chris Tucker wrapped up his testimony for the defense in the Michael Jackson trial today and the defense then rested its case shortly after 11 am PT after calling 50 witnesses over a surprisingly short 15-day period. 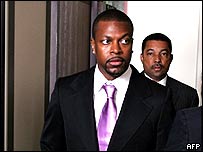 Tucker ran through his experiences with Jackson’s accuser and his family, whom he met in 2000 when the boy, now 15, was suffering from cancer. The boy said he wanted to be a comedian and contacted a number of performers, who gave him gifts and planned benefits for the family.

“I wasn’t aware that he was fond of that many comedians,” Tucker testified. “His father said I was his favorite comedian … I didn’t know he was contacting the whole town.”

Tucker developed a relationship with the boy that included gifts, outings to Knott’s Berry Farm amusement park, shopping malls and Oakland Raiders and Lakers games (where he was introduced to Kobe Bryant), and an invitation to Tucker’s brother’s wedding.

“He was really smart and he was cunning, but at the time I always overlooked it,” Tucker said of the boy. “He was always saying stuff like, Chris, let me have this, let me have that. Come on, I’m not feeling good.”

“I was getting nervous,” he said. “I thought, ‘I need to watch myself,’ because I’m high-profile and sometimes when people see what you’ve got they try to take advantage of you. I had to pull back.”

And Tucker said of the boy’s mother, “Something in my spirit didn’t feel right about her. I started getting nervous.” In discussing a truck that Tucker proposed giving to the family, he said the mother “started crying, not in the normal way. She started acting like frantically, like mentally. Something wasn’t right.”

“I got a little suspicious. I thought I was doing too much (by giving the vehicle), so I said no,” Tucker testified.

Tucker testified that at one point he took the family to Las Vegas at his own expense to watch him work on a movie, but after several weeks they were still hanging around. He said while in Las Vegas the mother “was always saying I was their brother and all that stuff and she loved me. I was getting a little nervous because my whole thing was just to help the kid, not get involved with the whole family.”

Tucker also said the accuser was disruptive on the set and caused complaints from the director and others. “Everybody had to say, ‘Chris, we have a job here to do’,” Tucker said.

After the Bashir documentary aired in early February 2003, Tucker said the mother called him for help in contacting Jackson, who was in Miami. “Everybody was excited to go down there and see Michael,” Tucker said. Tucker said he flew with the family on his chartered plane to Miami and brought them to the hotel where Jackson was staying.

Tucker told the court he then talked to Jackson privately. “I told him to watch out for [the mother] because I felt suspicious about her. I took him in the room and I was trying to talk to him, I said, ‘Michael, something ain’t right.”‘

The trial now enters the rebuttal stage, which allows both sides to call more witnesses to clarify various issues. Prosecutors called their first rebuttal witness, Santa Barbara County Sheriff Deputy Timothy Rooney, who testified that visitors’ logs involving the family of Jackson’s accuser were not in file cabinets he searched during a Nov. 18, 2003 raid on Neverland Valley Ranch, while the defense had previously called ranch employees who testified that the logs were there at the time of the raid.