Michael Jackson and 50 Cent: Wow, the polar ends of the creep spectrum appear to be meeting in the middle in a kind of thug/ethereal-alien summit.

Billboard.com is reporting that the first fruit of the unholy pairing would appear on a mixtape track, “Trial Of The Century,” mixed by G-Unit’s DJ Whoo Kid (born Yves Mondesire), who said he is venturing forth in two weeks to Jackson’s sand castle in Bahrain to snag tracks Jackson has been working on in his home studio. 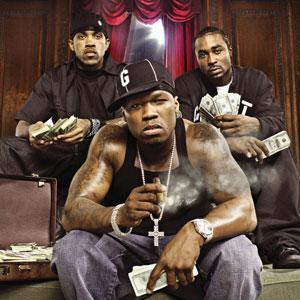 The mixtape, according to rumor, will be called MJ Unit – The Takeover — I kid you not — and may also feature unreleased Jackson songs and mash-ups of the former King of Pop’s classics with songs from the G-Unit catalog.

I can see Jackson’s angle of this unlikely collaboration: “I’m getting bugged driving up and down the same old strip – I’ve got to find a new place where the kids are hip.”

MJ desperately needs some street cred, which the multi-platinum-selling former drug dealer and serial shooting victim — and his G-Unit crew, of course — can certainly bring to the table.

Perhaps 50 Cent’s thinking is along the lines of, “He likes boys and he turned himself into a white androgyne, but Thriller is a historic slice of recording history, by golly.”

Only he would say it all thug-like. 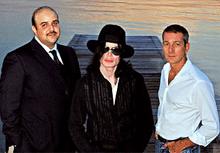 The report also says the the first single from Jackson’s renewed recording efforts in Bahrain — produced by MJ and Bruce Swedien — will be called “Now That I Found Love,” and will be released Nov. 21 on the Two Seas label, which is a joint venture between Jackson and Prince Abdulla Hamad Al-Khalifa. Brit Guy Holmes, chairman of U.K. indie Gut Records (Crazy Frog’s “Axel F”), is the new label’s CEO.