Holistic approach to TV and video a huge step forward.

It was just a few years ago that the Internet and television seemed doomed to remain separate if not antithetical entities, but with the continued rise in broadband Internet connection penetration, ever zippier and more capacious computers, and a tidal wave called YouTube, video and the Internet suddenly find themselves inseparable bosom buddies.

Following in the wake of YouTube, MySpace, and countless other video hosting and sharing sites and platforms — and influenced by the rise of digital video recorders (DVRs) — the major television networks, cable and satellite channels, and local channels have been madly integrating preview and highlight clips, web exclusives, and even whole episodes of their programs into their web presences as though their lives depend upon it, which they quite possibly may.

So, hmm, wouldn’t it be convenient if someone gathered, from all corners of the web/video/television continuum, a personalizable TV programming guide that also searched the webosphere for online video that match your interests?

What if they also built an entertainment info portal with news, clips, program details, credits, pics, and user/community input to go along with the nifty guide? 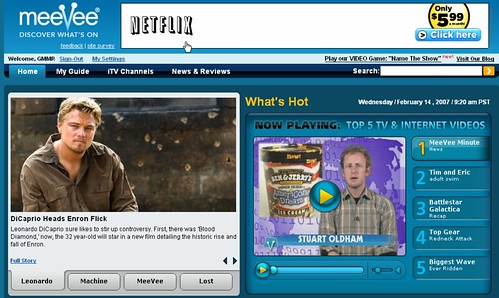 And just so no one could say they didn’t, what if the said eager gnomes also added relevant writing from some of the most astute and entertaining blogs around to add depth and personality to this heady, helpful video/TV stew? And what if it was free?

Then you would have the new MeeVee, which just launched yesterday with a boatload of new features to add to its already impressive TV guide, and its homegrown blog with original interviews, reviews, news and opinion, led by the spunky and beguiling Marjorie Kase.

Full disclosure: Blogcritics Magazine and MeeVee are content partners, sharing material in both directions, but the coolness of their technology and content acumen speak for themselves. In other words, we don’t get involved with people who don’t kick the llamas ass down the street and up your driveway (RIP, Wesley Willis).

So, by way of example, let’s say you find Jeremy Piven a scintillating on-screen presence (I just saw him at his most rodential the other night, by the way, when we finally caught up to the breathtaking middle-aged male fantasy Old School). You can check out when Jeremy’s show Entourage airs next via the TV guide, but you can also click on the video tabs and see clips of the Great Man appearing at the Breakthrough Awards, on Jimmy Kimmel and The View; bits from Ellen, Seinfeld, SNL; and previews of his film Smokin’ Aces – pretty much all the Piven you can handle in a single sitting, perhaps more.

All told, the new MeeVee is a huge step forward in bringing video, television, and the Internet into a seamless, annotated, and searchable whole.