I never knew proselytizing was considered charitable. That's such a relief.

Deliverance comes in all shapes and sizes and sometimes from the least expected places. Yesterday it snuck in my house via Canada Post. Concealed among the mundane missives motivated by material matters (credit card bills, a phone bill, and a utility bill) lurked my salvation.

The gold envelope was slippery between my fingers as I turned it over. Overwhelmed, stunned, disbelief warring with incredibility, my eyes traveled from the return address emblazoned in the top left hand corner to the luridly coloured picture on the right hand side. Quickly I checked the address label. Had I picked up someone else’s mail? I was still puzzled after ascertaining it was indeed addressed to my wife and myself. Why were we receiving mail from Save Me O Holy Queen by The Grace Of Jesus, Nobleton Ontario? I had a good idea who the garish picture on the envelope was supposed to be, but what did she want from me?

Bewilderment, revulsion, and hilarity were at war in my spirit as I laid aside the bills for the moment. At times like these, earthly matters pale into insignificance. When a vision of Mary appears in your mail, it’s only polite to give it priority. Besides which, my curiosity was afire with questions that demanded answers. Why does this woman look like she’s been sedated? What’s with the box of Valentine Chocolates around her neck surrounded by thorns? Was this some new weight loss program that worked through a combination of Christian guilt and prayer? 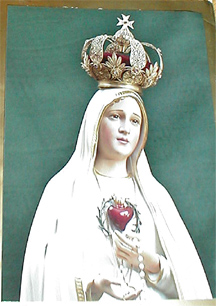 Trembling fingers ripped open the envelope at one end, as I did not want to imperil any of its precious contents. Nestled within, wrapped inside four double-sided typed pages, awaited the full size image of the face on the envelope. Stunned, I could only stare in mingled horror and disbelief as I struggled to recover from the impact. It was if my aesthetic senses had been hit with a Mack truck. Slowly my eye traveled down from her Imperial margarine crown, past her mannequin realist face, to the candy box heart from which, what looks to be, golden flames sprout upward, and the circle of thorns that surround it.

One word, and one word only leapt to mind as a result of my initial contemplation: Kitsch. So rarely seen outside of its natural environment of die cast replicas and attractive dinner plate reproductions, and usually only obtainable through special offers in Reader’s Digest and mass coupon mailings, I knew I had been chosen for a select honour. With that in mind, I turned to the enclosed paper work in order to discover what had made me so deserving as to merit being on the receiving end of this assault.

Look closely at the picture and see how she seems to be alive. It is almost as if she is about to say something to you…She is waiting for you. it is as if she is saying: ask me for everything you need, because I am here, ready to answer you…Let yourself be drawn to her…Take the time to converse with her. Mary is your heavenly mother. Let her speak to the depths of your heart…My great desire is that this joy, this hope Mary gives to her children will reign in every Canadian home…this great distribution is only possible with the help of those who would like to be benefactors so that others can also share this great gift…

Well isn’t that special. Not only can I rid myself of all my troubles simply by staring slack jawed at a painting of a mannequin, but I can also inflict it upon others by sending money to the Virgin of Fatima Association. Can’t you just picture the looks of surprise from all those people who receive this unsolicited picture in the mail: the Singh’s, the Howorwitz’s, and the Hussein’s — all those households just waiting with baited breath for their picture of Mary, Mother of Jesus.

What does it matter that some of them may have had family killed in Her son’s name only a few hundred years ago? I’m sure that’s not going to stop them from erecting a shrine right next to where they have one for Krishna, or next to where they keep their copy of the Koran or the Torah. They’ll be so excited, just like kids on Christmas day.

Such a noble sentiment to want to inflict this image on everybody in Canada, no matter their faith or creed. What a typical gesture of Christian charity to want to impose themselves and their beliefs on those unfortunate enough to not have had their noses rubbed it in yet. You can even get a tax receipt from Revenue Canada so you can write your contribution off from your taxes next year.

Here I was thinking that charities licensed by the government were supposed to do meaningless things like raise money for research into disease, help eradicate poverty, or enrich the culture of our land. How wonderful that charity also includes the opportunity to show others how misguided they are in their own devotions. I never knew that proselytizing was considered charitable, that’s such a relief.

I know for a fact that I was overwhelmed by the excitement of it all, so much so that I just had to tell everybody about it. But if you’re counting on my shelling out any money so that you may have a chance of receiving your copy of the Virgin and the Heart of Thorns in the mail, don’t hold your breath. You know how tight we Jews are with money.