A new origin story emerges in a spate of interviews.

In a spate of interviews, including one airing tonight on the BBC, Madonna tells a very different story about the life of the Malawian baby she is now caring for and hopes to adopt than the one reported thus far in the press.

An element that has always felt out of place about the adoption narrative is why — in a blighted African nation teeming with a million orphans — would Madonna in her infinite mercy and majesty choose to adopt a child, David Banda, who still has a living father and grandmother? This unsettling fact has doubtless fueled some of the resentment and mistrust swirling around the case, and has put both the diva and the boy's father on the defensive about the "arrangement."

A widely reported, heart-rending article that ran in the Guardian a couple of weeks ago, told the story of the boy's father, Yohane Banda, 32, an uneducated tomato and onion subsistence farmer, who lost his wife Marita, 28, six days after David was born. The couple's first son, Garnet, had died of malaria at two-and-a-half years old; and the second, Babel, died of an "undetermined illness" at 18 months.

Yohane had taken David back to his village of Lipunga, desperate in his concern for the welfare of his new son: he could not afford to buy milk and what if David got sick like the others? Neither his nor his dead wife's family could take in David — the traditional family support system has been shredded by AIDS, other disease, drought, and intense poverty.

Yohane's mother and the village chief agreed the best option for David was the Home of Hope orphanage 25 miles away, where he would be well fed, looked after by an in-house foster mother, and have access to medical care. Yohane took David to the orphanage by bicycle on the day the boy was five weeks old. "It was a very sad day for us," said Asianti. "Our only consolation was the child had a better chance of staying alive."

Yohane, as quoted by the Guardian, said he visited the boy twice a week, pedaling the 50-mile round trip on a borrowed bike. "We were very close to my child," said Yohane. "Whenever I left the orphanage, David would cry."

Tonight Madonna says otherwise, denying that David was visited at all by members of his family. "I never met a granny and I was told… that from the day that he was left in the orphanage he was not visited by any extended family members and that's really why I became interested in him," she says. 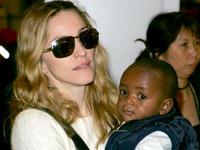 The pop icon told a more romantic story of why she "became interested" in David to Access Hollywood. "His eyes. He just had a soulfulness and a knowing look in his eyes and the first time his head turned around and he looked into a camera, I was completely drawn to him and curious about him. He haunted me."

Back to the BBC interview: "If someone had said to me, 'His dad comes every week or his granny visits on a regular basis and he's well looked after,' I would not even have given it another thought … His father lived 50 or 60km away, had no car, had no money and, as far as I was told, had remarried and moved on with his life."

Whether he did or did not visit his son in the orphanage, Yohane is singing Madonna's praises as if she were a true ray of light, or maybe a piece of heavy equipment. "Madonna was like a bulldozer who has cleared the way for a better life for my son," Banda is quoted as saying in an interview in tomorrow's edition of Germany's Bunte magazine.

The 48-year-old entertainer "explained to me that she wanted to adopt my son," Banda says in the interview. "She assured me she would take good care of David and raise him in peace. I told her that the most important thing for me was that she offered my son a good future. And then I agreed to the adoption."

Banda said he slaughtered a goat to celebrate with the whole family.

And what of the alternative offered up by Louise Richards of War on Want and others, who said the singer would have accomplished more by "helping [David's] father raise the child in Malawi and joining us and other charities pressing rich nations to keep their pledges to make poverty history"?

"I said I would be happy to … bring him back to your village and help you financially raise him. And he said no," Madonna told Today show co-anchor Meredith Vieira. Banda concurred in the Bunte interview. "She knows what to do with a lot of money, and I don't," he said. "I could not have started anything with the money, and in the end it would have only spoiled things for me and David." 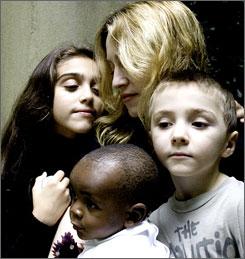 Although Malawian law bans adoptions by non-residents, Madonna was granted an exemption — an "interim order" granting custody for 18 months, giving Malawian courts time to "evaluate" the new parents "per the tribal customs of the country." Erm, yes — David is now getting tribal with Madonna and her other two children and husband Guy Ritchie in their London manse.

Coincidentally, Madonna has committed to generating at least $3 million to help her Raising Malawi organization fund orphanages, and is setting up a childcare center that will benefit as many as 1,000 children a day. All the proceeds of her new book, The English Roses: Too Good to Be True, are going toward the cause.

Did she get preferential treatment? Blatantly. Is it justified? Probably. Is David's life "better"? Materially, of course. David Holmes, of the British Association for Adoption and Fostering, said two weeks ago, "In a perfect world, inter-country adoption would not exist. We would be able to invest in every country so that they could develop systems and services for children and families to stay in their countries."

But it isn't a perfect world.

Profile: Pianist Rixiang Huang on Anti-Asian Bias and Becoming a Better Human Being Through Music