How could Yohane Banda give up his son for adoption? "My interest is in the child's best chance for health and education."

Madonna Takes In David, Who Will Take In Africa?

Perhaps a rich and famous continent will adopt Africa. Yes, its family will miss it, but at least it will be well taken care of, receive an education and healthcare, and grow up to be whatever it wants to be.

Yes, the above scenario is flippant, but the heartbreaking tale of little David Banda, the 13-month-old Malawian boy adopted by Madonna and her family, leads logically to this conclusion: between abject poverty and pandemic disease, particularly AIDS, there may be no other way out for the Cradle of Mankind. Maybe Africa needs to get out of Africa.

The boy — who arrived at Madonna's central London mansion on Tuesday amid press frenzy, feverish activity to block his "streamlined" adoption process back in Malawi, and with the judgment of onlookers around the globe pressing upon his tiny shoulders — will live a life of opportunity and freedom from want that his relatives — most heartbreakingly his father and grandmother — and the vast majority of his countrymen can scarcely dream of.

While today a Malawian court deferred for a week a lawsuit by the Human Rights Consultative Committee, a coalition of 67 local rights groups opposed to the adoption on the grounds that "laws were flouted and the government may set a precedent that can legalize human trafficking," an empathetic story in The Guardian helps put things in perspective. 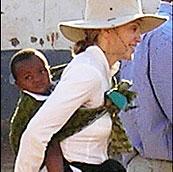 The vehemence of the criticism she has received has clearly caught the 48-year-old diva — normally a master of PR manipulation — off guard. "I know they are provocative and I prepare myself but I did not expect the media, the government or any human rights organizations to take a stand against me trying to save a child's life," she confessed to People magazine.

Those closest to David would appear to agree. Not only did the boy's father, Yohane Banda, 32, an uneducated tomato and onion subsistence farmer, lose his wife Marita, 28, six days after David was born, but the couple's first son, Garnet, died of malaria aged two years and eight months, and the second, Babel, died of an "undetermined illness" at 18 months.

Yohane took David back to his village of Lipunga, desperate in his concern for the welfare of his new son: he could not afford to buy milk and what if David got sick like the others? Neither his nor his dead wife's family could take in David; the traditional family support system, umunthu, has been shredded by AIDS and other disease, leaving up to one million orphans in a country of only 12 million.

Yohane's mother, Asianti, and the village chief agreed the best option for David was the Home of Hope orphanage 25 miles away, where he would be well fed, looked after by an in-house foster mother, and have access to medical care. Yohane took David to the orphanage by bicycle on the day the boy was five weeks old. "It was a very sad day for us," said Asianti. "Our only consolation was the child had a better chance of staying alive." 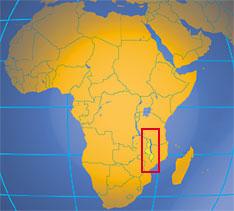 Life expectancy in Malawi is 40 years. Yohane visited the boy twice a week, pedaling the 50-mile round trip on a borrowed bike. "We were very close to my child," said Yohane. "Whenever I left the orphanage, David would cry."

Madonna, now a spiritualized mother of two, said in the last few years she has come to feel "more responsible for the children of the world," has given time, energy, money, and access to the media to her Raising Malawi organization, dedicated to "offering lasting solutions to the orphans of Malawi." She has committed to generating at least $3 million to help Raising Malawi build an orphanage and childcare center, which will benefit as many as 1,000 children a day. All the proceeds of her new book, The English Roses: Too Good to Be True, being published later this month, are going toward the cause.

Though she said otherwise, Madonna and her husband Guy Ritchie came to Malawi on October 4 for the express purpose of adopting an orphan, which of course David isn't, though he has now played one on TV. Before the Ritchies' visit to Malawi, Penston Kilembe, the country's director of social welfare, paid a call on Yohane and asked whether he would allow David to be adopted by a well-heeled, loving foreign couple.

Banda said "yes." "My interest is in the child's best chance for health and education," Yohane told The Guardian. "It was a hard choice to make, but when it seemed likely that David would have a better life with a new family, I could not say no."

"Poverty means that many people here find it difficult to support their children," said Boniface Tamani, chairman of the Public Affairs Committee, Malawi's largest interfaith organization. "David will now get an education he could never have got in Africa. Local wealthy people could learn from Madonna's example."

In response to accusations of special treatment due to her wealth, contributions to the nation through her Raising Malawi charity, and iconic status, the superstar said Tuesday via a statement, "We have gone about the adoption procedure according to the law, like anyone else who adopts a child. Reports to the contrary are totally inaccurate," adding (a bit defensively) that she and her husband had begun the adoption process "many months prior to our trip to Malawi."

She continued, "After learning that there were over 1 million orphans in Malawi, it was my wish to open up our home and help one child escape an extreme life of hardship, poverty and in many cases death, as well as expand our family."

Andrina Mchiela, principal secretary in the welfare ministry, told The Guardian, "Madonna has a big program in this country. She is a daughter of Malawi. There is no mistrust, and her integrity cannot be questioned." Regarding David, Mchiela said, "It was like when Moses was left in the basket in the hope that someone would rescue him. Madonna has rescued the baby. All we can say is, 'Bon voyage, David.'"

Yohane said yesterday, "I will miss David," he says. "I miss him already. But I know that it's for the best."