I have no doubt Madonna’s motives for adopting a one-year-old Malawian boy are only the noblest.

She gives time, energy, money, and access to the media to her Raising Malawi organization, dedicated to “offering lasting solutions to the orphans of Malawi,” of whom there are over 1 million in a country of only 12 million due to the ravages of famine, drought, poverty, and diseases including HIV/AIDS, malaria, tuberculosis, and hepatitis.

Madonna has committed to generating at least $3 million to help Raising Malawi build an orphanage and child care center, which will benefit as many as 1,000 children a day. All the proceeds of her new book, The English Roses: Too Good to Be True, being published later this month, are going toward the cause.

So that’s all really good – she is helping raise the standard of living and prospects for thousands of people in one of the most grim human habitats on earth. But it strikes me as a somewhat creepy, even emotionally selfish form of personal imperialism to then swoop down on this benighted land, Jolie-style, and pluck one — just one — impossibly lucky child from a short life (Malawian life expectancy: 40 years) of deprivation and pain and magically give him a life of rarefied luxury and privilege as the child — not just ward or beneficiary, but adopted child with all the emotional and physical usurpation that goes with that relationship — of one of the most famous women on earth. 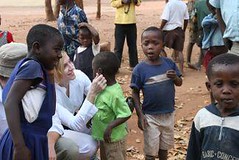 Even more complicating, the boy isn’t even really an orphan, though he has been living at the Home of Hope Orphan Care Center in Mchinji, a village near the Zambian border, since his mother died from complications of childbirth one month after the boy was born. His father is still alive and is in fact the one who broke the news of the adoption to the press, despite previous statements to the contrary by Madonna’s spokesperson Liz Rosenberg.

“I am the father of David, who has been adopted,” Yohame Banda, 32, told AP yesterday. “I am very very happy because as you can see there is poverty in this village and I know he will be very well looked after in America.” Or actually, England, where Madonna, 48, now primarily lives with her husband, movie director Guy Ritchie, and their two children, Lourdes, 9, and Rocco, 5.

Banda said his son, the chosen one, left the orphanage on Monday and was taken to the capital, Lilongwe, where Madonna and co. were staying at a luxury ranch after touring various orphanages in the southeastern Africa nation since October 4.

The man also said that he had been assured his son would return regularly to Malawi. “He will know his roots,” said his father. And, he will know the guilt of knowing from whence he was randomly snatched. 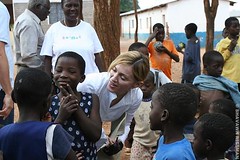 In an open letter to Madonna published yesterday, Malawian child rights group Eye of the Child urged her to not adopt a child but to “support extended family systems, offer education and financial support for secondary school going orphans, improve community participation and other community-based approaches to care for orphans. We believe that this type of efforts do not create and develop a dependency syndrome.”

Fantastic Fest Film Review: Getting ‘RAD’ Inside and Outside the Theater

'Let's Not Talk Anymore' by Weng Pixin stands out as a work of art as well as stories with masterful characterizations.