July 30th sees the return of the thinking man’s scary movie director, M. Night Shyamalan (The Sixth Sense, Unbreakable, Signs – how hard would it have been to change his last name to the much more melodious “Shamalamadingdong”?) with The Village, from Touchstone Pictures.

In M. Night Shyamalan’s “The Village,” the Academy Award-nominated filmmaker who brought you “The Sixth Sense” and “Signs” assembles an all-star cast, including Academy Award-nominees Joaquin Phoenix and Sigourney Weaver and Academy Award-winners Adrien Brody and William Hurt, to bring the thrilling tale of an isolated village confronting the astonishing truth that lies just outside its borders.

At first glance, this village seems picture perfect, but this close-knit community lives with the frightening knowledge that creatures reside in the surrounding woods. The evil and foreboding force is so unnerving that none dare venture beyond the borders of the village and into the woods. But when curious, headstrong Lucius Hunt plans to step beyond the boundaries of the town and into the unknown, his bold move threatens to forever change the future of the village. 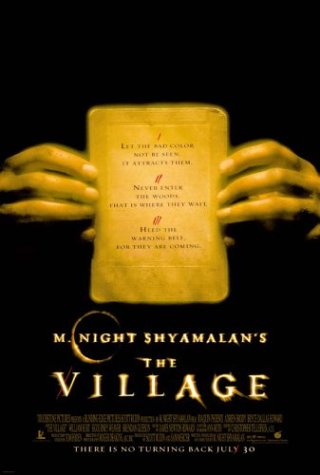