"On the cusp of humanity" 3.3 million years ago.

Big doings on what used to be called the “missing link” front over in the dusty Dikika region of eastern Ethiopia. A young Ethiopian scientist has uncovered a remarkably complete 3.3-million-year-old Australopithecus afarensis fossil specimen in the delicate, poignant frame of a three-year-old girl.

The little girl is of the same species as the famous “Lucy” (discovered nearby in 1974) and the stunning find consists of her whole skull, entire torso, and key parts of her upper and lower limbs, causing palaeoanthropologists hither and yon to do a little archaic dance of joy. Such geologically old juvenile specimens are exceedingly rare, and in fact, one has to skip forward three million years — to a Neanderthal infant from Syria — to find a comparably complete hominin juvenile skeleton. 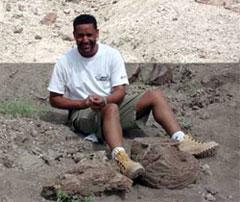 “In my opinion, afarensis is a very good transitional species for what was before four million years ago and what came after three million years,” discoverer and dig leader Dr. Zeresenay Alemseged, of the Max Planck Institute for Evolutionary Anthropology, told the BBC. 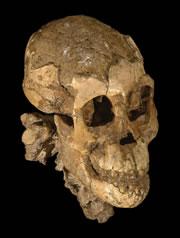 “[The species had] a mixture of ape-like and human-like features. This puts afarensis in a special position to play a pivotal role in the story of what we are and where we come from,” said Alemseged, who spent five years removing a slab of sandstone one grain at a time from around “Little Lucy,” as the specimen is affectionately called by some.

Found in a river bed, the toddler — who walked on two legs but may have also still swung from the trees from long arms, curled fingers, and ape-like shoulders — must have been quickly covered with sediment following her early demise, and was thus preserved so completely that her hyoid — the dainty little bone that holds open the throat — survives, allowing scientists to “understand what the voice box was like and about the kind of sound this creature made,” said Alemseged.

Initial indications are that her voice was likely ape-like.

The most exciting human-like trait of the species, though, is a developmental discovery attributable directly to the Dikika child. Her brain is actually smaller than it would be for a comparably aged ape, meaning this toddler and her kin already displayed one of the most fundamentally human developmental traits of all, neoteny – that is, slow and gradual development throughout an extended childhood.

Physical adulthood begins in chimps at about two-years years; while in humans it doesn’t occur until between the 14th and 17th years, enabling human higher functions to fully develop. Lucy’s baby was already headed in that direction. “She is on the cusp of humanity,” enthused Dr. Alemseged.