We mentioned at the end of October the fascinating discovery of a new species of little humans on the Indonesian island of Flores. Now, inevitably, controversy has erupted over whether Homo floresiensis is descended from an archaic human species, Homo erectus, or from modern humans, Homo sapien. The knives are drawn: 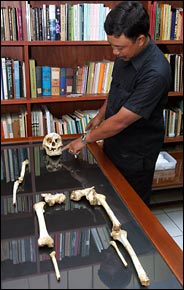 The little Floresians seem to have made sophisticated stone tools yet did so with brains of 380 cubic centimeters, about the same size as the chimp and Australopithecine brains. This is a thumb in the eye for the tidy textbook explanations that link sophisticated technology with increasing human brain size.

The Australian and Indonesian researchers who found the Floresian bones have an explanation that raises almost as many questions as it resolves. They say the Floresians, who stood three and a half feet high, are downsized versions of Homo erectus, the archaic humans who left Africa 1.5 million years before modern humans. But some critics think the small people may have descended from modern humans – Homo sapiens.

….Homo erectus had arrived on the remote island of Flores by 840,000 years ago, according to earlier findings by Dr. Mike Morwood, the Australian archaeologist on the team. The species then became subject to the strange evolutionary pressures that affect island species. If there are no predators and little food, large animals are better off being small. Homo erectus was sharply downsized, as was the pygmy elephant the little Floresians hunted.

….not only have the Floresians evolved to be much more advanced than their ancestors ever were, as judged by the stone tools, but they did so at the same time that their brain was being reduced to one-third human size. Getting smaller brained and smarter at the same time is the exact reverse of the textbook progression.

The Floresians’ other surprise lies in the time of their flourishing. The skeleton described in Nature lived as recently as 18,000 years ago, but Dr. Morwood said that in the most recent digging season he found six other individuals whose dates range from 95,000 to 13,000 years ago. Modern humans from Africa arrived in the Far East some time after 50,000 years ago and had reached Australia by at least 40,000 years ago.

There has been little evidence until now that Homo erectus long survived its younger cousins’ arrival in the region. Modern humans probably exterminated the world’s other archaic humans, the Neanderthals in Europe. Yet the little Floresians survived some 30,000 years into modern times, the only archaic human species known to have done so.

….Given what is on the record so far, the argument that the Floresians are descended from Homo sapiens, not erectus, has a certain parsimony. Moderns are known to have been around in the general area, and no Homo erectus is known to have made such sophisticated tools.

Dr. Morwood counters this thesis with data that he has not yet published, and which therefore does not strictly count in scientific arguments. The 95,000-year-old Floresians far antedate the arrival of modern humans in the area. There are modern human remains on Flores, Dr. Morwood says, but the earliest is 11,000 years old, suggesting there was not necessarily any overlap between the two human species.

His view is supported by Dr. G. Philip Rightmire, a paleoanthropologist at Binghamton University in New York and an expert on Homo erectus. “There is no ambiguity about the morphological pattern, and it is erectus-like,” Dr. Rightmire says of the Floresian skeleton. “I’m not sure why it should be difficult to accept the reasoning that the little Floresians made progress with stone working and honed their hunting-butchering skills” during their long co-existence on Flores with the pygmy elephants, he said.

….Whether the Floresians’ line of descent runs through Homo erectus or through Homo sapiens, a whole new line of human evolution has opened up, even though one that is now all but certainly extinct. The Floresians are not like human pygmies, which have almost normal-size brains but smaller bodies because their growth is retarded during puberty. Nor are they dwarves. The skeleton described last month could be a called a midget, in the sense of a tiny person with the head and body proportions of a full-size person, Dr. Klein said. [NY Times]

Amazing stuff – I assume they’ll straighten out the lineage eventually. In the meantime, it’s clear to me that the Floresians migrated to Oz and became munchkins.