Lindsay Lohan and Paris Hilton Have Holes In Their Wardrobes

Lindsay Lohan's vagina is all the rage these days. First it got its very own name, "Firecrotch," as dubbed by the "Greasy Bear" oil heir Brandon Davis during a now infamous rant in the company of a tittering Paris Hilton.

As if the public hadn't had enough of "Firecrotch" in both name and spirit, Lindsay has now twice in as many weeks revealed not a "fire-crotch" but rather a shaved and saggy hooch to the press, her adoring fans, frightened fauna, and future generations who will sadly ponder what the hell was wrong with their ancestors.

irst, numerous sites popped up with photos of Lindsay stepping out of a boat in Venice to promote her new movie Bobby, which clearly show Lindsay loaded for bare.

The Lilo bald eagle was bad enough, but then her agents were exposed attempting a photo-doctoring cover-up, which generated as much outrage as the initial peek at her naughty bits.

Subsequent photos with poorly photoshopped undies in place helped create enough air of confusion as to question which was real and which was fake. Celeb gossip site, The Superficial did some digging and determined that the original from the photo agency with Lohan's high-and-tight exposed was the real deal.

For you pervs, here's a close up of the nation's treasure.

Fast forward a week and a new locale, this time London, and Lindsay is again spotted completely unaware of the draftiness about her nether regions. The photo at right has been sanitized for your protection. The real deal is a staggeringly stark close up shot of her Brazilian, and the detail is spectacular and undeniably Lohan (not for the weak of constitution).

Showing the naked knuckerhole is not a new trend. Cutting-edger Paris Hilton did it long before she was just Paris. Exposing one's va-jay-jay (as all the kids call it) must be the new haute couture, but only if you are a desperate, attention-seeking, sloppy hosepot.

For Paris' va-jay-jay, gander hither, but I suggest some kind of protective eyewear.

What, the confluence of dress or skirt, unadorned womb spout, photographers, and motor vehicles never strikes these people as potentially, um, perilous?

Chances are pretty good that you won't find celebrities like Nicole Kidman, Meryl Streep, or even Katie Holmes going commando in public. Decent people are taught to not only wear undergarments, but to keep them clean even.

Lindsay's mother, Dinah Lohan, must be some kind of a crusty skank herself — if I had such a high-profile, paparazzi-magnet tramp of a daughter who was caught by the camera in such an "exposed" manner, I would have lit into her like a lighthouse and you could be sure such an "incident" would have occurred only ONCE.

As for Paris' mother — dear lord, she must have given up hope around the time One Night In Paris hit the streets.

Not to put too fine a point on the business end of Lindsay's "business," but these tawdry acts and less than professional behavior are giving her more than a bad rep — it's affecting her career. Unlike Paris, who has become famous for being a rich slut, Lindsay has potential to be something more than a piece of overpriced Hollywood alley trash. She has — dare we say — talent.

Just ask "Hanoi" Jane Fonda, Lohan's co-star on the film Georgia Rule and an expert in youthful displays of idiocy. Ms. Fonda spoke out about the 20 year-old Lohan on the NBC's Today show, openly siding with Morgan Creek Studio exec George J. Robinson, who chided Ms. Lohan sternly in well-publicized memo for her "unprofessional" behavior while on the set and general discourteousness toward her fellow actors.

Fonda stated, "She parties all the time … And you know, 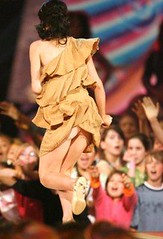 she's young and she can get away with it. But, you know, it's hard after a while to party very hard and work very hard. She learned that, I hope."

You tell her, Barbarella.

Even if Lindsay has learned a lesson or two about on-set behavior, she is still clueless about completing an ensemble that covers all her bits and pieces. What's up Lindsay, ya never heard of a thong? And let us not forget Lindsay's crack shot for the kiddies at April's Nickelodeon Kid's Choice Awards show.

It's called modesty, decorum, and taste. And aren't you concerned 'bout something crawling up there?

Clearly, Lindsay did not get enough hugs as a kid. For this, we are all sad, but with a therapist and some good clean underwear, there is hope.

And as for Paris, it's only a matter of time before the herpititis she and Travis Barker are creating will be her undoing — until then, just keep your distance.