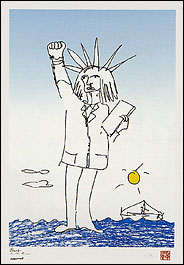 In more, and far more positive Lennon news, next month will see the release of a remastered and expanded version of Lennon’s 1975 Rock ‘n’ Roll album, and Acoustic, which is just that: acoustic versions of 17 of his songs.

Opening today is a gallery showing of Lennon drawings:

Ms. Ono is presenting “When I’m Sixty-Four,” an exhibition of drawings, caricatures and sketches that Lennon almost compulsively created throughout his life. The show opens Thursday at 102 Wooster Street (between Prince and Spring Streets) in SoHo and runs through Sunday.

….The show, which includes handwritten lyrics (finished and in process) as well as Lennon’s drawings, has been touring the United States for about a decade. Ms. Ono said that she changed a few pieces at each stop, and that she probably still had drawings that nobody had seen.

“Every now and then,” she said, “I discover a drawing in the pages of a book that he was reading, kind of like a quick ad-lib.

“I have no idea how many drawings there are. I’ve never done a definite catalog. Sketching was like John’s security blanket. The guitar was as well. He was always strumming, but when he wasn’t playing the guitar, he was drawing. Guitar and pen.”

….His earliest drawings appeared in “The Daily Howl,” an exercise book that Lennon surreptitiously passed around his classroom for laughs. There, and in the books he published during the Beatle years, he tended to draw bizarre creatures, often with huge heads, long, skinny limbs and clawed feet. By the late 1960’s, he had largely abandoned these peculiar visions in favor of autobiographical sketches, including a set of drawings of his wedding to Ms. Ono in 1969 and the more sexually explicit line drawings of the “Bag One” set.

….Quickly dashed-off self-portraits – often just an image of long, flowing hair and round glasses – became a steady motif for the rest of Lennon’s life, as did domestic scenes. During a 1977 visit to Japan with Ms. Ono and their son, Sean, he created a set of snapshotlike family scenes using traditional Japanese bamboo brushes and sumi ink, which Ms. Ono calls the Karuizawa series. These were clearly meant to be more than doodles: Lennon signed and dated them, and gave several of the pictures titles.

During his final years, Lennon’s drawing took a more didactic turn. Partly to illustrate his own Japanese lessons and partly to entertain and educate Sean, who was born in 1975, he began to draw animals and common objects, including aphoristic captions describing them. [NY Times]

Netflix’s new film 'I Care A Lot' is about the worst nightmare that could happen to vulnerable senior citizens.