It's far easier to think you know your enemy than to try and know yourself.

I’ve never had much fondness for symbols, political, religious or otherwise. They usually end up being more trouble than they are worth. Just looking at how many people have died for the sake of a symbol over the course of human history is enough to convince me of their malignance.

They seem to be a hangover from the days before we had a written language with which we could express ideas and thoughts. Symbols are designed to appeal to the emotional aspect of our makeup, not the rational. In the hands of a skilled orator, they can be used to sway opinion and reach decisions that fly in the face of reason and logic.

Some may argue, and with a measure of validity, that during times of strife a symbol is useful for rallying people to a cause. But usually, someone else and their symbol have caused that period of strife. Perhaps if our symbols weren’t the embodiment of abstract ideals they wouldn’t be so problematic, although, given human nature, I have to wonder, if we used items as prosaic as vegetables whether or not we’d run into the same situations.

There is the argument that all language is really just a series of symbols; letters represent sounds that when combined together become words that take on a meaning in order to represent an object, action, or idea. While that is true, it is also true that this form of symbolism more often results in the pursuit of rational discourse than the brandishing of a device such as a flag or a holy relic.

The basic problem with so many symbols is that they seem to divide, or compartmentalize, which allows one group to formulate an opinion about another. If they follow that flag they are this, and therefore they are either good or bad depending on whether their flag is in accordance with ours.

Instead of being celebrations of distinctiveness, symbols have become a means of comparing, contrasting, and judging. Pride has been replaced by chauvinism and nobody seems to really care. It’s easier to believe in one’s superiority than to try and understand someone else’s ways.

Given that this pattern of behaviour dates back into ancient times, long before Christianity, and the fact that there appears to be one symbol that has ever been even remotely universal, is amazing. But the labyrinth has appeared in media of one form or another, at one time or another, on every continent. Cave paintings, petroglyphs, carvings, chalk outlines, and countless bad movies about aliens, have all featured this ubiquitous, ever inwardly, descending spiral.

Before anyone washes their hands of me too much and thinks I’m about to embark on some wild theory about aliens, sorry to disappoint. I don’t think it’s that much of a mystery why labyrinths are everywhere people have been. No matter what your creation story is, we all came from the same place originally. I don’t see why people are surprised that, in the earlier parts of history, our ancestors still had enough similarities to come up with the same images for similar ideas.

The idea of universal symbols, or archetypes, was the focus of Swiss psychiatrist Carl Jung and his theories of the collective unconscious. In a nutshell, Jung said there were certain symbols, he called them archetypes, that all of us understand and we are born carrying that knowledge. 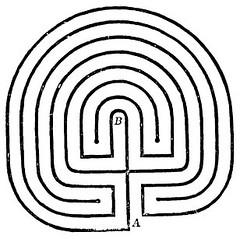 We can all look at the picture of the labyrinth and recognize it for what it is because we have probably seen pictures of one at some point in our lifetime. There are probably quite a few of us who even have heard one or more of the stories associated with labyrinths, the most famous being the Theseus and the Minotaur on the Island of Crete.

What I have found most fascinating about the labyrinth symbol is the fact that so many cultures not only depicted it, but the similarities that abound in its usage. At its most basic, of course, it depicts a journey. Who makes that journey and their ultimate destination provides some diversion in the similarities, but the basic concept is the same.

In the American Southwest, the Hopi use two variations of the labyrinth they call the Mother and the Child. Mother, being Mother Earth, is a square and represents spiritual rebirth from one world to the succeeding one (they believe that they are currently in the fourth world.) In the square, the straight line entering the labyrinth is not connected to the rest of the construct. The two ends symbolize the two stages of life – the unborn child within the womb of Mother earth and the child after it is born. The line is both the umbilical chord that serves as connection and the path of emergence into the next world.

The circular pattern follows the shape we are more familiar with, of the straight line connecting to the paths of the labyrinth. This represents the path planned out for each person by the Creator. It’s not just the Hopi among the indigenous nations of North and South America who use this symbol. Across both continents it has been used to either describe the journey of creation, or the path of life (The Book Of The Hopi, Frank Waters, Penguin Books 1963 pp. 23-24)

Leaving North America to return to Europe, we find labyrinths scattered across all the countries and in a wide variety of places. Ancient standing stones, similar to those of Stonehenge but not as formally constructed, that stand sentinel over various tombs and other, formally, sacred grounds, are emblazoned with labyrinths.

Tales that talk about Bards having to travel inside the earth and successfully find their way out again are merely a dramatic means of depicting the journey of self awareness and growth that all artists experience in some manner.

Given the ritual nature of the Druidic culture, it’s possible that the image of the labyrinth and perception-altering herbs were used in tandem to facilitate that journey of self-awareness. This process is similar to that utilized by the shaman of some South American peoples for the same purpose, lending credence to tales of these events taking place.

Even if we dismiss some of the more fanciful associations given to labyrinths that come down to us from the pre-Christian era, the concept of “the journey” came down through the years. Many of the most famous labyrinths in existence today can be found in churches and cathedrals built in the medieval period.

Like the Hopi interpretation, these early Christian designs signified the path one would take from ones birth (entrance) to finding God (the centre). Adhering to the path ordained by the church would ensure your salvation just as certainly as following the lines laid out in the floor would take you to the centre of the pattern. There is also a case to be made that the Church co-opted this concept from its predecessors in order to ease worshipers of the old ways into the fold.

Whether they were walking the path of the labyrinth to come closer to their God or were utilizing it to gain a better understanding of themselves and their place in creation, everybody understood this symbol to have a similar meaning and function. It is unfortunate that it did not retain its position of importance in Europe.

Perhaps it was due to its very universal nature, and because it was a reminder of pre-Christian times, the church felt threatened by its continued use. Perhaps as people began to turn their faces outwards from their personal domains and look to expand their holdings, they became less concerned about, or even more to the point, desired it less, looking inwards.

The last thing one wants to be reminded of is those tenets of your faith that prohibit the course of action you are embarking on. Spending time contemplating thou shalt not kill, and thou shalt not covet your neighbour’s possessions aren’t of paramount importance to somebody about to embark on a looting and pillaging spree.

As both individuals and the church moved to consolidate their power, it became easier to focus on the simple symbols of the faith, like the cross, which were easier to use to inflame people’s passions, rather than the ones that favoured contemplation and thought. Besides, if you want to create an enemy, it’s easier if you are seen as being different and not having anything at all in common.

As Islam started to rise in prominence, the Protestant reformation occurred. New worlds were opened up and differences became the justifications for actions on all sides of the coin. Instead of being the path to enlightenment, labyrinths became symbolic of confusion, a place to become lost, not find yourself. Now we use it adjectively to mean something unreasonably complex and difficult to comprehend.

Today we use the symbols of our countries and our religion to ferment support for everything from war to political parties. We judge everybody and everything by how they measure up to what we are told these items represent even though, in and of themselves, they have no meaning, only that which we give them.

At one point in our history, we had a symbol we could all agree on, and to some extent still do. It just seems that not very many people are interested in what it stands for anymore. It’s far easier to think you know your enemy than to try and know yourself.