He may not remember signing it, he doesn't remember much, but we still have his signature on a poster to giveaway.

I think we all have our favorite bits and pieces that make us who we are, right?  For me, it's my belly button.  I can't imagine what life would be like if I had an outie.  And, what if I had no belly button at all?  Can you imagine, no belly button whatsoever.

Picture it – you're a little kid, you're at the pool in the summer, running around, dancing, laughing playing, going to the bathroom in the water as little kids tend to do, that sort of thing.  All of the sudden your friend comes up to you and he has this weird indentation in his stomach.  You've never seen anything like it before it.  You think there's something wrong with him, but then you quickly realize that everyone at the pool except you has the same indentation (well, there's that one boy with the same spot popped out a little, but no one ever talks to him).

Wow.  Can you imagine the heartbreak?  The tragedy?  The upset?  The distress?  The years and years and years of therapy that would be necessary to overcome this blow to your system?  You might actually lose your memory and then wake up at the age of 16 in a forest and have no recollection of your life to that point whatsoever.

Imagine it, you could call yourself "Kyle XY" and you could have a show about yourself called Kyle XY, and you could meet a nice girl named Jessi XX who has similar problems to you.  In 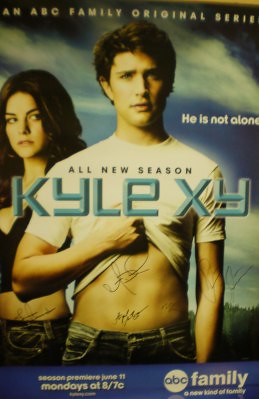 the end, despite your shock and upset it may not have been the worst thing in the world, what happened to you that day at the pool.  I mean, you did get a TV show out of it, didn't you?

Of course, on the other hand, it might be pretty horrific.  You might be forced to sign, along with a several of your costars, a bunch of posters for giveaways on sites such as this one.  Oh the horror, imagine it, you  (Matt Dallas), Jaimie Alexander, Chris Olivero, Marguerite MacIntyre, and April Matson all signing posters over and over and over again.  It's practically a fate worse than death.

Well, whatever your fate, Kyle XY, we're still giving away one of your posters in anticipation of the brand new episodes of your series, Kyle XY, that are airing as of January 14 on ABC.  Aren't we just the best?

So, check out the picture of the poster to the left (which in honor of Kyle's memory is fuzzy) and read the rules below: