Like Inspector Clouseau, a "boomp" on the head is little more than a nuisance for Richards.

Grizzled, sinewy, Rolling Stones guitarist Keith Richards, 62, made it home to Connecticut in more or less one piece Monday after South Seas adventures worthy of a new song or two.

Though Richards claimed to be “feeling great, happy to be home and looking forward to getting back on the road with the Rolling Stones,” the band announced today that the first 15 shows on their “A Bigger Bang” European Tour — from Barcelona, Spain on May 27 through to Zagreb, Croatia on July 5 — have now been postponed. World tour concert promoters TNA/CPI asked ticket holders for the postponed shows to retain their tickets until the rescheduled dates are announced “in the next few days.”

After falling from a Fiji coconut tree on vacation in April and being transported to New Zealand for hospital treatment, the legendary bon vivant seemed to miraculously recover before complaining of increasing headaches in early May. Doctors at the Ascot Hospital in Auckland detected a hemorrhage and thought it “prudent to move ahead with a small operation to remove the pressure” in Richards’ brain on May 8 — a procedure that was deemed a “complete success.” 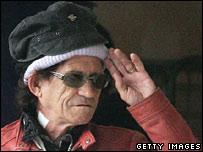 Alarmed Stones fans erupted in protest when the above photo was released, presuming as they did that one of the greatest rhythm guitarists in history had had his chording hand sewn onto his forehead. These fears — fortunately — proved unfounded.