Contrary to reports last week that Keith Richards, 62, would not require brain surgery after falling from a Fiji coconut tree two weeks ago, after the rapscallion Stones guitarist complained of headaches on Sunday, a hemorrhage was detected and doctors at The Ascot Hospital in Auckland, New Zealand thought it “prudent to move ahead with a small operation to remove the pressure” in his noggin on Monday. 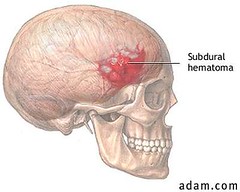 The “small operation,” a craniotomy, involves drilling or cutting into the skull to remove pressure on the brain. Keith’s representative Fran Curtis termed the operation “100% successful,” adding, “There was no brain damage. He continues to improve as expected.”

As a result, the Stones’ “A Bigger Bang European tour” will begin some time in June rather than on May 27 in Barcelona as previously scheduled.

There is NO truth to rumors that Richards’ brain tried to escape his skull during surgery, nor that bloodletting specialist Theodoric of York, Medieval Barber, was flown in for emergency consultations.

Mick Jagger’s ex-wife Jerry Hall told AFP that Keith is “doing very well,” adding that she is in email contact with Richards’ wife Patti Hansen, who is with him in New Zealand.