"Good to be here, good to be anywhere."

One thing about Keith Richards: he is not complacent. How would you spend your time if you were a 62-year-old, multi-millionaire, notoriously hedonistic rock star who has achieved every artistic, popular, and financial height imaginable over a 45-year career?

Would you continue to tour the globe half the time, continuously migrating like a very noisy butterfly, beating on your guitar and straining to “sing” when called upon in your whiskey and cigarette-ravaged voice? 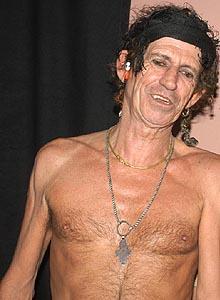 On hiatus from your current world tour — due to start up again in Barcelona on 27 May — vacationing with your wife Patti Hansen (and who thought THAT would last?) at an exclusive Wakaya Club resort in Fiji, would you climb a freaking coconut tree?

This is apparently what Keith did, perhaps believing the reports of his own invulnerability after a lifetime of filtering enough chemicals through his body to kill a waste treatment plant. 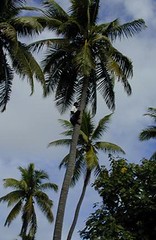 So last week Keith is scampering up this coconut tree: Is he using the “front-foot” technique? Or perhaps the “frog” technique? Perhaps he uses the vampire technique and simply flies up to the coconuts?

Regardless, something goes awry and his 62-year-old body becomes disengaged from the tree and plummets to the ground. Is he killed? Does he break various frail and aging bones? No, he suffers a “mild concussion.” Rumor has it he shook off the resultant headache, went Jet Skiing, and had another accident. It’s like Weekend At Bernie’s, except as far as we know Keith is alive.

He was then flown to a hospital in New Zealand, and will reportedly be ready to go when the Stones begin the European leg of their “Bigger Bang Tour” in Barcelona on the 27th.

There was concern that the guitarist would need surgery to drain blood from his brain, but no! the blood and the brain are fine: “He’s feeling good and in good spirits,” said spokeswoman Fran Curtis yesterday.

This is not Keith’s first fall. He broke three ribs and punctured a lung falling from a ladder while reaching for a book in his library in 1998. He reads too? Battered but never broken, Keith scampers on: “Good to be here, good to be anywhere.”