Ascendant young actress and Girlfriend of Tom Cruise, Katie Holmes (Batman Begins), 26, has announced she’s converting to the Church of Scientology, where she will be, coincidentaly enough, a coreligionist of Mr. Cruise. 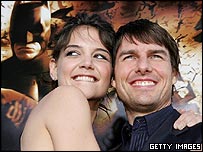 The pair have been turning up all over the place, separately and together, professing their love, devotion and career synergy. Just in the last week they paired for the opening of Batman Begins, with Cruise mugging and signing autographs like his hand was about to fall off; Cruise announced his involvement with Mission: Impossible 3, and parodied his own earlier Holmes-related exuberance on Oprah during a Tonight Show visit.

Today Cruise is Tokyo for the premiere of his new film, Steven Spielberg’s remake of War of the Worlds, and Holmes, who grew up with a picture of Cruise on her bedroom wall, is in London promoting Batman Begins, where she said she’s “excited” about her lessons in Scientology, a religion founded in 1955 by science fiction writer L. Ron Hubbard.

When asked by Entertainment Weekly if he plans to propose to Holmes, Cruise said, “It’s gonna happen, man. It’ll happen.”

One wonders if the Scientology was a stipulation, and if in fact Cruise is in love with the pliability rather than the person.

But he told EW, “Listen, the thing you’ve got to know about Katie is that she’s an incredibly bright and self-determined woman. She makes her own decisions.”

Cruise’s ex-wife Nicole Kidman was reportedly very uncomfortable with his dedication to the church, contributing to the end of their ten-year marriage.

Here is Beliefnet’s discussion of Scientology, which sounds an awful lot like a more expensive version of Hindu and early-Buddhism to me.