The baby's human, but no word yet on the parents.

Spokesman Paul Bloch said the couple “joyously welcomed” the arrival of their daughter, “Suri,” who tipped the scales at a demure 7lb, 7 oz, and measured 20 inches long. Bloch also indicated that mother and baby are “doing well.” No details of the birth itself were given, including whether or not Holmes — who recently ditched Catholicism and joined Cruise in the big spaceship of Scientology — labored in silence as per that religion’s teaching. 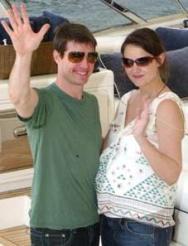 Suri means “princess” in Hebrew or “red rose” in Persian, so they’re covered if WWlll begins in the Middle East.

Cruise has two adopted children from his marriage to Nicole Kidman. The movie star said he and Holmes will be married in late summer or early fall.

In an interesting side note, the Parade Magazine website conducted an online poll asking readers whether they thought Tom Cruise, who is preparing for the May 5 release of his new film Mission: Impossible: lll, was responsible for his “difficult year” with the press, or whether it was the media’s fault. 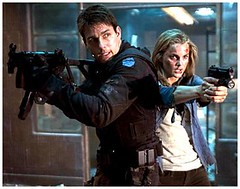 84% of respondents said the media was to blame and that Cruise did NOT bring his recent image problems on himself.

The Parade people found this odd and did some investigating. They found that more than 14,000 of the 18,000+ votes cast came from only ten computers. One computer alone was responsible for nearly 8,400 votes, all blaming the media for Tom’s troubles. Cruise has some notably committed, not to say cultish, fans it would seem.