I can intellectually comprehend how a human chopstick like Kate Moss can be – amped on attitude and pickled in glamor – a super model icon for over a decade and command monstrous figures to bless fashion products and publications with her vacant stare of approval. But it must also be said that junkie chic is macabre and vile, and Moss, 32, has the sex appeal of a tween dysentery victim. On the other hand, maybe there are a lot more Gary Glitters out there than I realized.

Today, the the UK Crown Prosecution Service said that, although September '05 film footage of Moss hoovering cocaine enthusiastically and passing it around like baby pictures at a London recording studio (where she was visiting then-boyfriend, Babyshambles frontman Pete Doherty) "provides an absolutely clear indication that Ms. Moss was using controlled drugs and providing them to others," the "precise nature" of the drug could not be established and as a result there was "insufficient evidence" to prosecute.

The hollow-eyed minx lost large coin modeling contracts with H&M, Burberry, and Chanel, and checked into a rehabilitation clinic in Arizona after pictures of the episode were published in the Daily Mirror last year. 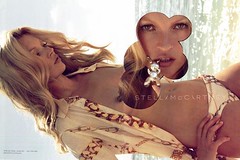 CPS spokesman Rene Barclay said, "Expert analysis of the footage…narrowed the possibilities down to three particular drugs – cocaine, ecstasy or amphetamine. But these three substances fall into two different legal categories of controlled drugs. To obtain a conviction, case law establishes that the prosecution must prove beyond reasonable doubt, the legal category to which the substance being used belonged."

It couldn't have been Italian baby laxative?

When the pictures emerged, a "devastated" Moss apologized weepingly through her modeling agency Storm, and said she took "full responsibility" for her actions. 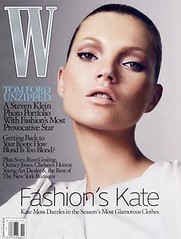 "I also accept that there are various personal issues that I need to address and have started taking the difficult, yet necessary, steps to resolve them," Moss, who has a three-year-old daughter Lila Grace, mumbled through a stackable block of smoke.

W magazine put Moss, who was "discovered" at 14 walking through JFK Airport on vacation with her parents, on the cover of its November issue, the first fashion publication to do so after the drugs allegations.