"Namibia is a country where everyone has the right to freedom of movement." The more rich and famous, the more "freedom" you are entitled to.

Jolie to Give Birth in Namibia – Paparazzi Wars Heat Up

Luckily for Namibia, out of all the hundreds of countries in the world Angelina Jolie and Brad Pitt have deigned to verify that scenic but impoverished South African nation’s existence by birthing their baby (expected to be a girl) there in May. They may even go so “native” as to give the child a Namibian name.

According to South Africa’s Sunday Times, the couple revealed their plans during a breakfast on Friday with the governor of Namibia’s Erongo region, Samuel Sheefeni Nuuyoma. Jolie reportedly fell in love with Namibia, which has an HIV infection rate of over 21 percent, during the ’02 filming of Beyond Borders — “an epic tale of the turbulent romance between two star-crossed lovers set against the backdrop of a war-torn African country” — and giddily expressed her infatuation by distributing 2,000 pizzas to the locals, many of whom mistook them for Frisbees. 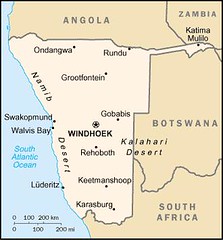 Pitt and Jolie, who flew to Namibia from Paris on April 3 with adoptive children Maddox, 4, and Zahara, 2, have rented all 14 rooms and suites at the Burning Shores luxury resort, where the dunes spectacularly meets the sea on Long Beach, north of Walvis Bay, for a total of ten weeks. Their security erected a green shade-cloth barrier to shield the lodge’s garden from view; and at night, giant spotlights illuminate the beach and surrounding streets to discourage unwanted visitors.

Tension has been steadily mounting between Team Brangelina security, paparazzi, and locals. Two weeks ago security men “manhandled” two local female reporters and forced them to delete pictures from their digital cameras. Last Thursday, an Australian tabloid photographer, Ben McDonald, was pepper-sprayed and chased off by a Team bodyguard as he photographed Pitt playing catch with Maddox in the lodge garden. 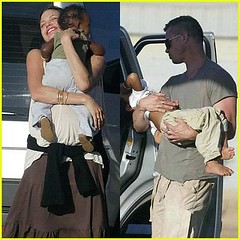 “They’re out of control. It’s a public beach and yet they carry on as if they own it,” a local businessman told the Times. “They really don’t have to be so aggressive. They can’t just go around threatening people. I sympathize with Brad and Angelina because they do want privacy, but on the other hand they are public figures and there is a lot of interest in their visit. From what I hear, they are really nice people, but their security guys most certainly are not.”

Chief among the “not nice” is Jolie’s British bodyguard Mickey Brett, who heads the security operation. A pale, powerfully built man who has also worked for Nicole Kidman and Sandra Bullock, Brett has been nicknamed “Snowy” by the paparazzi and is referred to as “the very white white man” by black staff at the lodge. Brett is best known for such snappy quotes as, “I’m going to break your neck”; and, “I’m going to break your f*ckin’ legs.”

He also reportedly told a Sunday Times reporter, “We’ve come here because there are privacy laws. We’ve got the backing of the governor, the mayor and the chief of police. They’ve told us that if someone takes photographs and we don’t want to be photographed we can use force.”

Governor Nuuyoma said he wanted his guests to feel “at home and free”; adding, “Namibia is a country where everyone has the right to freedom of movement and they must not feel inhibited when they visit this beautiful country of ours.” Of course, the more rich and famous you are, the more “freedom of movement” you are entitled to.

Namibian immigration officials are also in on the squeeze. A reporter was quizzed about his reasons for being in the country and whether he had a work permit. “People are doing illegal things with long lenses on the beach,” the official said, adding that it was unlawful to “photograph couples.”

The paparazzi skirmishes are unlikely to end soon: the first picture of Jolie and her newborn baby could bring up to $1 million in an expected bidding war.