"The final chapter is hidden away, although it's now changed very slightly."

Ten years ago come August, U.K. publisher Bloomsbury made an offer to first-time novelist J.K. Rowling on a book about a plucky tween wizard named Harry Potter. Rowling had begun work on the book six years earlier and was uncertain that it would ever be published.

Just a decade later, Joanne "Jo" Rowling, 40, is the first person to have become a billionaire from writing books, having sold over 300 million copies of the first six books in the planned seven-part Harry Potter saga. 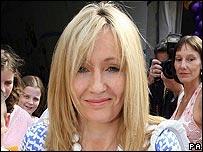 And to prove she has REALLY arrived, Rowling was invited to read from her latest Potter adventure, Harry Potter and the Half-Blood Prince, at Queen Elizabeth's 80th birthday party yesterday at Buckingham Palace.

Regarding book seven, which Rowling is now pondering and scribbling, she said, "I am feeling sad as it is the last one. But so far, so good." When asked about the book's progress, she said, "I'm doing well I think. You can never really tell till you get near the end. I am not quite there yet." 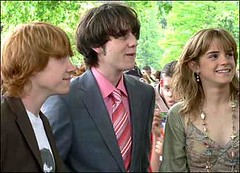 Besides the Queen and her court, 2,000 children were in attendance for Rowling's reading. A thousand kids from four to 14 won tickets to attend the event in a lottery as part of the monarch’s birthday celebrations. Each was allowed to bring a friend and an adult.

“I think this is the most wonderful way to celebrate the Queen’s 80th birthday,” Rowling told The Times. "We are in a golden age for children’s literature in Britain. I always believed children would come back to enjoying books – and that’s not just down to me." Harry Potter would have been “a bit fazed” by the event, she said. “But he’s quite cool, and I think he would have been impressed." 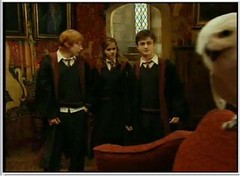 As part of the proceedings, an elaborate show was made of sending an owl from the Palace to "Hogwarts" in pursuit of wizardly aid to resolve the crisis of the Queen's stolen handbag. Daniel Radcliffe (Harry), Rupert Grint (Ron Weasley), Emma Watson (Hermione Granger), and Matthew Lewis (Neville Longbottom) participated in a prerecorded segment of the show — filmed in the Gryffindor common room on the Order of the Phoenix set — where they received the owl and debated how to handle the crisis. They ended up lending the muggles some magic.

U.S. Harry Potter publisher Scholastic will release the paperback edition of Harry Potter and the Half-Blood Prince on July 25, 2006. On August 1 and 2, Rowling will appear with Stephen King and John Irving in "An Evening With Harry, Carrie and Garp" at Radio City Music Hall in New York City. Both evenings will feature King, Irving, and Rowling reading selections from their own works, surprise guests, and an audience question and answer session; and each will benefit two non-profit organizations: the Haven Foundation, which helps performing artists whose accidents or illnesses have left them uninsured and unable to work; and Doctors Without Borders.

UPDATE
Though Rowling didn't reveal anything about book 7 at the Queen's birthday bash, today in an interview broadcast on Britain's Channel 4 she did leak a bit. "The final chapter is hidden away, although it's now changed very slightly. One character got a reprieve, but I have to say two die that I didn't intend to die," she said. "I'm not going to commit myself, because I don't want the hate mail or anything else," she added.

She said she understood the urge to keep a main character like Harry to herself. "I've never been tempted to kill him (Harry) off before the end of book seven, because I always planned seven books and that's where I want to go.

"I can completely understand, however, the mentality of an author who thinks, 'Well, I'm going to kill them off because that means there can be no non-author-written sequels … so it will end with me, and after I'm dead and gone they won't be able to bring back the character'."