Michael Jackson’s brother Jermaine, with nothing much else to do, spoke with Larry King about his brother’s condition, frame of mind, future, the trial, the possibility of a Jackson family musical reunion, and lots of other things last night. 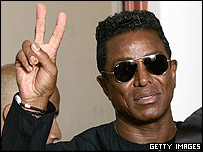 “Michael’s recovering,” Jackson said. “But it’s a time for rejoice for the family, and we’re very, very happy. As you can see, I’m smiling, and we always knew he was 1,000 percent innocent … he’s at peace and we’re very happy.”

Asked about Michael’s health, Jermaine said, “Well, his health, he’s been sort of not eating. But he’s strong — he’s probably one of the strongest people I know … to sit there and hear these things said about you … he’s strong. He got dressed every morning. He came to court. He was there and he was there for the verdict … he’s a strong, strong person.”

What’s he going to do now? “I’m pretty sure he’s just looking to rest. That’s his most important — to rest and get his mind back and just focus on just being a person. Nothing about doing this or doing that, but just resting. That’s most important.”

Was he treated fairly? “Larry, when you look at how many times, how many warrants they went into his property, how it was done, the bail, and just — to take his passport, like he’s a fugitive, like he’s going to run. I mean, to treat a person like this, especially Michael Jackson, who’s just the most wonderful person.

“I mean, it saddens me deeply because it’s 2005, but yet we haven’t gone anywhere. I mean I call this, as you know, a modern-day lynching. And it was — I really meant that, because people, they all just jumped on him.

“And I have, an 18-page thing of this ongoing charities and things he’s done around the world in every corner of the globe, helping people, giving, giving so much. The world needs to see this. They need to know who he really is. When you look at the song ‘Childhood,’ and you listen to that song, you listen to what he’s saying. We’re not ready. We have so far to go, and we’re in the year 2005. That’s what saddens me, because we should be proud. America should be proud to have someone like a Michael Jackson.”

Might he leave the U.S.? “I would. Yes, I’m pretty sure … we’ve always had a love for other places outside the U.S. — I don’t know. But I do know that he needs to go and get some rest somewhere.”

KING: Are you surprised then that Gallup –CNN/USA Today/Gallup poll says 48 percent of the people disagreed with the verdict, 27 percent were pleased. Is that one of the reasons you are thinking about living somewhere else?

J. JACKSON: Listen, listen. Larry, listen. This is my point. The media bashed my family and Michael all during this trial. They bashed him. They talked about him, even other legal people. And at the same time, they say, OK, let’s go to the polls. Let’s take a poll.

…KING: Michael has paid millions to settle previous allegations. Tom Mesereau said last night, that was — he had bad advice. Michael shouldn’t have paid anything. Do you agree?

JACKSON: Yes, I agree, but during the time, Michael was on tour. Janet was on tour. My mother was very ill, and it just — he felt that it wasn’t the time to fight. But this time he fought, and we were victorious.

KING: The impact on his future behavior — do you think he’s going to change some of the things he does just for public image?

JACKSON: Larry, there — OK, Michael is not a weird person. Michael is not — I mean, this is just a bunch of talk, calling him Wacko Jacko, all of these crazy names. He doesn’t do anything. Have you ever heard of him throwing televisions out of the hotel windows and setting fires and doing this and that? I mean, that behavior goes on in our industry as we know that. But I guess it’s because they pick on him because he is the largest, largest entertainer in the world, and they will find something to say.

JACKSON: I mean, there are things that he’s going to change … not to let people get so close to him, and we’re going to make sure of that as well.

KING: Nor — he’s not going to let anybody take advantage of him?

JACKSON: Well, people come around you and they smile, but they have a hidden agenda and we’re faced with that everyday. Everybody who’s patting you on your back is not your friend. But at the same time, it’s up to us to know who’s who. I do know that — all my brothers, we will make sure that these type of people stay far away. Far away.

…KING: In “Billie Jean” he described himself a victim. Do you think he’s a victim? Is that a correct term to apply to him?

JACKSON: Well, when you’re in an industry and you’re out in the public, you’re victims of all types of things. And his music influences, people take context of his lyrics the wrong way, and things happen. I fear sometimes when I’m out, and now since Michael’s been vindicated, we all just — we all have to be careful. I mean, we — we love the fact that the family held up and there was a family support, but still at the same time you never know when someone’s plotting and planning.

KING: Would you describe your brother as child-like?

JACKSON: I would describe my brother as a person who was in search a childhood that he never had, but at the same time, he was around adults, and when you’re around adults all the time, you hear — who wants to hear about all of the ugly things that are going on in the world? I mean, Michael’s a person who loves peace. He’s a very humble person. I call him St. Michael because he’s the most wonderful person I know, and I mean that. He’s a wonderful, wonderful person.

…KING: How about a Jackson family reunion tour?

KING: I mean, you would do that, right?

KING: Do you think Michael would do it?

KING: By the way, in all honesty…

…KING: Jermaine, it’s been no secret the family has feuded in the past. There’ve been public feuds and problems with your dad and growing up. Has this, in a sense, brought the family closer together?

JACKSON: Well, this has brought us closer, but at the same time, we’re a family. We’re no different than any other family who has feuds and problems. What is life without problems? I mean — but at the same time, we’re united, and we have united front that is very, very strong, and its supported by god. My mother and father did a great job in instilling the morals and principles in us from the very beginning. We feel that with that, with that, that’s all you need to go through life.

KING: Your father was — your father was tough, though, was he not? Have you forgiven some of the — the way you were treated as a kid?

JACKSON: I was treated fine. There’s nothing to forgive. I mean, any black family or any black child or just person out there listening, we grew up like any other black family. You did something, you got your butt tore up, and it wasn’t tore up, it was just, you got a spanking. And so, making this more than what it is — they’re looking for problems.

…KING: So, what are you going to be doing, Jermaine, now that this is over?

JACKSON: I’m going to be, just, probably just working on some music, starting a label, and just staying strong, staying by my family, staying by my brothers. My brothers are — we’re strong. We’re ready for whatever. If there’s a tour, fine. If not, we’re going to continue to be a family, a united family. We came through this.

KING: If Michael leaves the country, would you?

JACKSON: I’ll be right there.

JACKSON: Right there with him. We love — we love the people in America. It’s been the media and we have nothing bad to say. I mean there’s some wonderful places here, but at the same time, there are wonderful places all around the world and we need to just travel and see more.