Jackson Trial May Not Begin For a Year 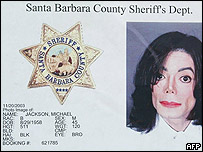 A picture may be worth a thousands words, but this one leaves me speechless – it looks like a morgue shot.

The BBC does a good job of going over the legal terrain of the new Jackson case:

The charges of child abuse against Michael Jackson may, at first sight, look like a case of history repeating itself.

Jackson faced charges of child abuse in California in 1993, levelled by the then 13-year-old Jordan Chandler, but the charges were dropped.

The prosecutor in that case was Thomas Sneddon, the Santa Barbara district attorney. He has served as in that role since 1982 – and is leading the case against Mr Jackson again.

….In 1993, the criminal case collapsed because the child and his family refused to testify.

The civil case which resulted was stopped because Mr Jackson made an out-of-court settlement that halted proceedings.

….If child molestation charges are alleged, then the victim must testify in court.

due to changes in the California law brought about in response to the first Jackson case in ’93.

An arraignment – where the charges are heard in court and the defendant enters a plea – has been set for January.

After that the case will go to a preliminary hearing, where evidence is heard and the presiding judge will decide whether there is enough evidence to take the case to trial.

Ms Chase said she believed the case would go to trial, because the threshold of proving evidence in a preliminary hearing was much lower than the “beyond reasonable doubt” required in an actual trial.

….The judge will then set a date for a trial, Ms Chase said.

“That can be a short time or it can be a long time. And it can be delayed at the request of the defendant, in order for them to build a case for the defence.”

If Mr Jackson requests a delay, it could be a year before the case goes to trial.

….If Michael Jackson is found guilty, he will face a prison sentence. The charges carry a mandatory minimum sentence of three years – and a maximum of eight – for each count.

Ms Chase said it was unlikely Mr Jackson’s passport – which has been surrendered to police – would be given back to him until a trial is over.

'Ozark' is a story of self-preservation amidst late-stage capitalist chaos.