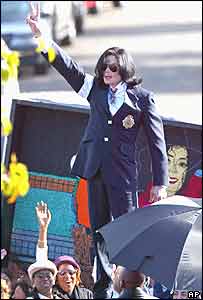 The pop superstar was surrounded by cheering fans as he left the courtroom after the initial hearing in Santa Maria, California.

“I love my fans,” he shouted to reporters as his bodyguards guided him through the crowd.

Finally he stood on the roof of his car waving at supporters, blowing them kisses and flashing peace signs, before being driven away.

Earlier, the actual court proceedings had been a more subdued affair.

Mr Jackson, 45, was told off by the judge for arriving in court 21 minutes late.

He emerged from a people carrier at about 0835 local time to cheers and screams from fans who lined the route to court.

Superior Court Judge Rodney S Melville told the singer he should not have been late: “Mr Jackson, you have started out on the wrong foot here…

“I want to advise you that I will not put up with that. It’s an insult to the court.”

The judge set a first pre-trial hearing date for 13 February which will determine if the star’s case goes to trial. [BBC]

See, this is the kind of crap that leads me to believe that Michael cannot control himself, and that his sense of entitlement and exceptionalism are so ingrained as to be irrevocable. The most important appearance of his life and he can’t be on time? If the asshole had made me wait 21 minutes, I would have been much harsher than this judge was. But see, it’s all about Michael – the world revolves around Michael – you can add solipsism to the list of his charming personality traits. He should seriously consider an insanity plea – at least people will believe it.

He has been charged with seven counts of child molestation and two counts of administering intoxicating liquor to a minor with the intent of committing a crime.

….The charges accuse Mr Jackson of molesting a boy, who is identified in court papers only as “John Doe”, between 7 February and 10 March 2003.

They include a “special allegation” of “substantial sexual conduct” – of which a conviction would make Mr Jackson ineligible for parole. [BBC]