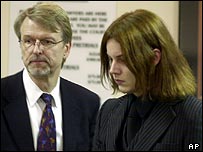 What is more embarrassing? To have been spat upon and pummelled about the face and neck by Edward Scissorhands (note pic), or to have beaten to death by your girlfriend with an iPod?

He must now pay a $500 fine plus $250 for court fees and take anger management classes.

….White had denied aggravated assault, arguing that he hit Stollsteimer in self defence.

He could have faced up to a year in jail if he had been found guilty of that charge.

Judge Paula G Humphries also ordered White to stay away from Stollsteimer, who was once good friends with White on the Detroit music scene.

In court, White said he confronted the Von Bondies star at the city’s Majestic Theatre because he had heard allegations made against him in the press and to mutual acquaintances.

“I went up to ask him to say it to me face to face,” White said.

White spat on him when Stollsteimer ignored him, and the pair started fighting, he said.

Stollsteimer told police White punched him seven times in the face, resulting in a bruised and swollen right eye and bleeding nose that required hospital treatment.

After the hearing, White told reporters he regretted the incident and had put it behind him. [BBC]

You can bet Jack White would not allow Meg to beat his ass with an iPod, or any other MP3 player for that matter.

When the Delta variant deprived the Vancouver Symphony Orchestra USA of its venue for a long-awaited return to in-person concerts, Executive Director Igor Shakhman had to get creative.