Grey, not black, and not white, is the predominant colour of history.

Israel And Palestine: Mapping The History

I must have look puzzled, and some of my shock must have shown on my face, because she clarified by saying that what she meant was where did they come from and how did the situation originally come about. I was still shocked, not the least because I wondered how many other people don't know what had happened back in the late 1940s through to post-1967?

How many people don't know that when the state of Israel was formed in 1949 five Arab armies attacked determined to throw the country into the sea; that the Israelis fought off their invaders and tried to cross over into the Arab half of the partitioned country but were repelled by Jordanian troops? In the aftermath, a majority of the Arab population left on the Israeli side of the partition fled to the Arab side looking for a home and became the original Palestinian refugees.

I'm not sure what the British envisioned with the part of the land not given over to Israel after partition. Did they foresee a new Arab state being formed? As it is, the neighbouring countries Jordan and Egypt absorbed the land. Of the two, only Jordan was willing to allow the refugees to enter into their country. 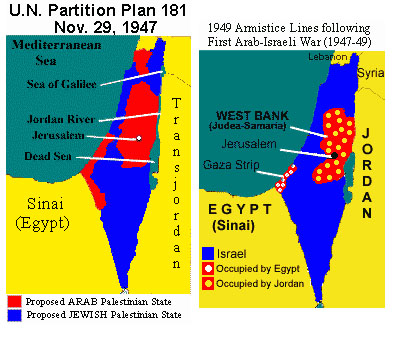 But they were not allowed to settle anywhere outside of areas that the Jordanian government designated. Thus were born the first refugee camps. Jordan was nervous about allowing too much intermingling between her people and the Palestinians because they were afraid of what they saw as a breeding ground for disaffection and terrorism.

Originally there were fears among all the Arab countries who had taken part in the war after partition that those for whom the land was meant would possibly take action against them or instigate unrest in their countries. It was one of the reasons that none of them were eager to allow the refugees to make any sort of permanent settlements in their countries.

The Palestinian refugees and what are now known as the occupied lands are two entirely different issues, which is something conveniently forgotten on both sides of the discussion. In 1967 the Israeli air force and armoured brigades staged pre-emptive strikes against a buildup of pan-Arab forces. By the time the dust had cleared they had "occupied" territory that had not originally been within the boundaries of Israel. This included the West Bank, including the half of Jerusalem that had been deeded to the Arabs, the Gaza strip, the Sinai Desert, and the Golan Heights.

The map remained unchanged until 1982, when as a result of the Camp David Accords, Israel returned the Sinai Desert to Egypt, which had no impact on the Palestinian refugees because they were never living there anyway. Since that time the territory that Israel controls, save for the Golan Heights, is all part of the original land mass that was supposed to have been two countries. 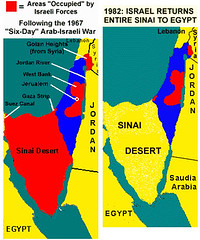 This question has always remained in my mind — what happened in the post-1949 period to the Palestinian State that was supposed to have been formed simultaneously with Israel? The land was under Arab control – Jordan on the one hand and Egypt on the other – but in the twenty-eight years from 1949 until 1967, nothing was done to form a state.

It wasn't until after 1967 that anyone seemed to come up with idea of the creation of Palestine, after the Arab countries had lost the territory to Israel in the Six Day War. Why during the years that Israel was establishing itself domestically, building infrastructure etc., did the Arab world allow the Palestinians to live in the squalor of camps and not build the state that they were designated?

Part of the reason was of course refusal to accept that they wouldn't one day push Israel into the sea, but you'd think after a decade or two you’d start to want something a little more permanent. Anyway the same towns that exist today in the West Bank existed then. Bethlehem and the rest have been there for a couple of thousand years, and didn't vanish out of existence.

Yes, the Arabs who lived in pre-1947 Israeli territory felt forced to vacate lands that some had lived on for generations, and probably I would have felt the same resentment and fear that they did when that occurred. There are Arabs who still live in Israel to this day, but I'm sure the comfort level for them after five armies of Arabs had just tried to wipe out their neighbours must have been pretty low and not conducive to staying put.

There is no denying the poverty that the Palestinians live in, but to lay the blame totally at the feet of Israel for circumstances that have existed before they exercised any control over those territories is wrong. The Arab world has to be held accountable for ignoring the plight of their own people for twenty-eight years. Was it a deliberate ploy to foster hatred for the new state of Israel? Or was it just the governments of Jordan and Egypt wanting as much land as possible?

Those are just a couple of questions whose answers are too late to be of value any more, the other one being what would have happened if the land had been put to the use it was meant for. Would an Arab state have grown alongside of Israel, and how would that have changed the dynamic of the Middle East as we know it today?

What-ifs are fine for fiction, but can only make you crazy in the real world. What is important is to remember that other options did exist at one time, but for whatever the reason, those options weren't exercised. What they do offer us, aside from regrets, is a sense of perspective and the realization that once again grey, not black, and not white, is the predominant colour of history.