"The most famous series are those that have more heart than shock," says Turner.

Multi-genre author J.R. Turner dabbles into many genres – romance, suspense, character-driven action, horror, and now young adult. Her new upcoming series, Extreme Haunting, soon from Echelon Press, features a smart, tomboy skater heroine out to fight evil. In this interview, Turner talks about the first novel in the series, DDF: Dead Friends Forever, her love for the supernatural, her favorite authors, and about violence in young adult books.

Thanks for being here today, J.R. Why don't you begin by telling us a bit about yourself and the kind of fiction you write?

I write character-driven action, suspense, horror and romance – and many times a combination. Right now, I just completed my first YA Horror novel and I found the ride thrilling. As a huge fan of horror and action adventure movies, I tend to gravitate toward that in my writing/reading. Dean Koontz, Michael Crichton, Clive Cussler, Stephen King, Anne Rice–I read them over and over. 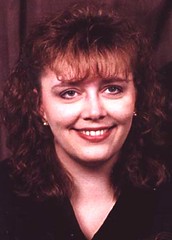 I wasn't always a writer, though. Ten years ago I gave up a 15-year career as a contract artist and craft instructor for the Milwaukee Public School system when we moved to central Wisconsin. Art, for me, was more of the family business, never my first passion. I could never capture the epic quality of the worlds alive in my imagination on a single canvas. When the moment came for me to make the choice between reestablishing myself as an artist, or exploring my writing in a more serious manner – I jumped at the chance.

Six or so years later, my first book was published and I've been enjoying writing novels ever since.

When did your love for the dark side of things begin?

When I was eight years old, I saw The Exorcist. I had never before, or ever since had such a reaction to a movie. It's one of those things you never forget and changes you forever. At that moment, I fell in love with the horror genre. From Full Moon productions to Class of Nuke'em High and other Troma films, of course all the Meyers, Jason, Night of the Living Dead and Texas Chainsaw Massacre films, then on to Japanese influenced films like The Ring and The Grudge. I absolutely adore Resident Evil, so I wouldn't want to leave that out. Hostel, Hostel II, the Rob Zombie movies like The Devil's Rejects, House of a Thousand Corpses, etc., are others I own.

When I was eleven, I discovered Stephen King's book, The Stand and fell in love with written horror. From there, I branched out into John Saul – who has many teenage proganists. Robert McCammon became another favorite, as well as Koontz, Rice, Douglas Clegg, and Clive Barker.

Looking back on my writing now, I'm surprised I didn't try my hand at horror before. It's just amazing writing the supernatural and the intensity those situations have within a character. By far, I'm most excited about this new book and can't wait for it to come out.

Tell us about your upcoming young adult horror novel, Dead Friends Forever. What is it about?

DFF: Dead Friends Forever is the first book in my Extreme Hauntings series. I am in love 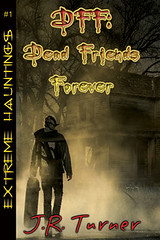 with Kaylee Hensler, my heroine. She's a tomboy, skater girl with all sorts of real-world problems that at first, she thinks are devestating. Until a dead girl begins haunting her. Things go from bad to worse quickly. It's hard to explain to your psychiatrist father that you're seeing dead people, and that a murdered girl who suddenly wants to be your best friend is turning up at school, in your kitchen, and in your bedroom. Yet it gets even more intense when she discovers who — and what — is keeping this spirit from moving on. Once she becomes the target, events become mortally dangerous for her.

I can't say how much I completely loved writing this story. My style is action-based, so I worried that without the adult options of guns, bombs, and military training, I'd be left rather empty handed when it came to those fast-paced scenes. Oh boy, was I wrong! Instead, what I discovered was how very suspenseful and charismatic the supernatural can be. Talk about action – I couldn't stop, the story kept evolving, scene after scene of something fantastic happening. I could barely step away from the computer. This experience allowed me to explore areas I feel silly for never attempting before. I don't know if I'll ever write a non-paranormal/supernatural story again.

What prompted you to write a horror novel for young adults?

My kids have been bugging me to write a book they would be interested in for years. My publishing house opened a new young adult imprint, "Quake," and invited me to write a series for them. Because my kids had nagged me for so long, I said yes. At the time though, I was just wrapping up an action-adventure series and had to wait until that was complete. At first I thought I would do fantasy, as that's a genre I enjoy as well. However, I knew that world-building would be a challenge and coming off my first series and all the challenges I faced with that (exciting-but in some ways exhausting as well) I wanted something a little more natural to my style, but something I would have tons of passion for.

I had picked up a few of my John Saul books from my keeper shelf during a recent move. While waiting for paint to dry at the new house, I read. It reminded me of how much I loved the genre and the younger protagonists were perfect to get me into the right frame of mind. From there, I read a ton of Young Adult horror and mystery books. Then one day, the idea for an Extreme Haunting series just clicked and I could hardly type fast enough.

I need to take a moment here, though, and mention a television series I'm absoluetly ga-ga over. CW's Supernatural. It is a phenomenal show and I've been promised the third season for my birthday. I'm recording the fourth season as it airs because it just takes too long to get from one Thursday to the next! Almost more than anything, I think this series really cemented the idea of doing a paranormal book.

There's a fine line, there. I think that the violence has to have meaning and be purposeful for it to be within the bounds of making a story great, or it simply becomes shock value that loses what's truly spectacular about this market: the everyday hero/heroine. What I found most appealing writing with a younger heroine was her resilience and how she coped with what was happening to her, whereas an adult more set in his or her ways might have crumbled. If the violence becomes the focus, then the character gets lost and that can ruin any story, for any market.

Who are some of your favorite young adult novelists these days?

Of course there's the Twilight series by Stephenie Meyer, and while it's not strictly horror (more sci-fi) I highly enjoyed K.A. Applegate's Remnants series. Maximum Ride series by Patterson is really awesome too.

Some would say that many of the horror young adult novels published these days become famous because of their shock value. What do you think?

I don't think so. The most famous series are those that have more heart than shock. Of course shock will cause a buzz, but it seems to do so more among parents than teen readers, and normally quickly fades away. I do think that books today need to reflect the times. No longer are girls wearing tea-length dresses, or bobby socks and saddle shoes. Today, rightly or wrongly, they are being tested by more and more adult concerns as the world becomes more dangerous and fast-paced. A lot of that is simply survivalism, some of it is most likely unnecessary, but overall, I can't imagine it's easier today to shock a teen than even twenty years ago. So what might seem shocking to us as parents, might be old-hat for teens today, considering what they face in the media, in schools, and on the street. In my book, and in my series, I'm not interested in shocking them – just giving them a substantial and scary read.

Do you have a website or blog where readers may find out more about you and your books?

Yes! My website is www.jennifer-turner.com and my blog is jr-turner.blogspot.com. I love to hear from my readers very much.

What are you doing this Halloween? Do you dress up?

I'm planning on dressing up like Isabelle, the ghost in my book–as part of a fun Halloween book signing at a store near my hometown. Mostly though, I dress up my kids. They've been everything from a Pepsi machine to a "baseball bat" — a round baseball with bat wings — and a hippo ballerina. We enjoy Halloween almost more than we do Christmas around here.

What is your favorite Halloween monster and why?

Oh gosh – that's a toughie. Vampires are so terribly romantic. Aside from the Anne Rice books/movies, I loved Bram Stoker's Dracula with Gary Oldman and Winona Ryder. Frank Langella, though, will always have a special place in my heart. I love the whole Underworld series. Werewolves are great, too. Van Helsing starring Hugh Jackman is one of our favorite family films. Anne Rice's book, The Mummy and the totally unrelated movies series by the same name starring Brendan Frasier are terrific, too.

Just one?? I don't think I can do that – I haven't even begun to cover how I love zombie movies and end of the world films like 28 Days Later and 28 Weeks Later. I didn't get to mention UnDead, which is a fabulously done film made by the Spierig brothers (special effects done on home computers!) with zombie fish and a very cool and unique plot twist.

I better stop now–you've got me on a roll here and this could take all night. Gosh, I didn't even get to cover all my Stephen King favorites or mention M. Night Shyamalan!

I've got some super awesome plots and supernatural beings coming up in the Extreme Hauntings series. From a haunted hospital to a truly insane asylum, it's going to be a wild ride! But don't worry, Kaylee is going to discover more and more what latent talents she has deep inside her to get her through what lies ahead. I can't wait myself to write these books!