"My particular obsession with portraying the dark side is very much about exploring a constant battle between good and evil."

Interview with Alexandra Sokoloff, author of The Horrowing and The Price

Mayra Calvani October 25, 2008 Comments Off on Interview with Alexandra Sokoloff, author of The Horrowing and The Price 67 Views

California native Alexandra Sokoloff is a professional screenwriter, director, choreographer and author of the supernatural thrillers, The Harrowing and The Price. The first was nominated for a Bram Stoker Award for Superior Achievement in a First Novel and for an Anthony Award for Best First Mystery. She has adapted numerous novels for film for companies such as Sony, Fox, Disney, and Miramax. Sokoloff is a regular blogger at Murderati.com and Muse, a new collective of female dark suspense authors.

It's a pleasure having you here today, Alexandra. Tell us, when did you start writing?

Well, in hindsight I could say that I started writing when I was about eight or nine – not stories, but some friends and I would write little plays and put them on in a neighbor's garage, charge admission, all that! But I was really much more into the acting side of it for a long time. I was a theater kid all through high school, mostly loved doing musicals – was an avid singer and dancer and still am – but I quickly became more interested in the big picture of production. I directed the senior class play when I was 16, and from there I kept directing and also choreographing, but got more and more interested in playwriting. The moment that I committed to writing for all time, though, was when I wrote my first one-act play in a class at Berkeley and the professor chose it to have a graduate student direct it. The moment my characters walked out on that stage, real, live people, I felt like God. It's been writing for me ever since! And I’ve been a professional writer most of my adult life – I only recently made the transition from screenwriter to full-time novelist.

When did your love for the darker side of things begin? Did you read paranormal books as a teen?

I blame my Dad! He's a huge genre fan and we had all kinds of horror and mystery and sci-fi classics around the house. Anything with a spooky cover, I'd read, and I particularly liked the supernatural and paranormal, but my preference was always for the more psychological supernatural. Dad grew up in Mexico City and had some whopping good ghost stories of his own, too.

But I also had some pretty scary things happen to me, or rather almost happen to me, as a kid – I was almost abducted by a child predator when I was very young, but thankfully got away, and since my family traveled a lot I was exposed to some pretty dark things – poverty, desperation, oppression, madness. My particular obsession with portraying the dark side is very much about exploring a constant battle between good and evil, even on a very small, person-to-person level, and seeing how good can triumph, at least one battle at a time. 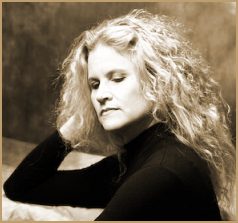 You're the author of two supernatural thrillers/horror novels, The Harrowing and The Price. Would you tell our readers a bit about each book and what was your inspiration for them?

The Harrowing is set on an isolated college campus just as it's emptying out for the long Thanksgiving break. Five troubled and very disparate students have all decided to stay in their spooky old Victorian dorm because they don't want to go home to their dysfunctional families. And as they start to bond, as college students will do, and realize that they have more in common than they think, they also start to realize that they are not alone in that dorm. But they don't know if one of them is playing a prank, or if someone else has stayed to mess with them, or if they're really starting to experience a genuine haunting.

And I guarantee the story will keep you guessing, even though the clues are all right there.

The inspiration for that one was a poltergeist experience I had when I was sixteen, which got me fascinated by the question of whether paranormal experiences are supernatural or psychological or perhaps a combination of both.

The Price is a completely different kind of haunting. Boston District Attorney Will Sullivan has it all – a beautiful and devoted wife, an adorable five year old daughter, Sydney, and he's considered a shoo-in for the Massachusetts governor's race. But on the eve of his candidacy Sydney is diagnosed with a malignant, inoperable tumor. Will and Joanna move into labyrinthine Briarwood Medical Center and are basically waiting for their baby to die, and going out of their minds with grief. But in the twilight world of the hospital, terminal patients seem to be recovering, against all odds, and the recoveries all revolve around a mysterious hospital counselor who takes a special interest in Will and his family. When Sydney miraculously goes into remission, Will suspects that his wife has made a terrible bargain to save their daughter's life, and must race to uncover the truth in order to save them all.

The inspiration for The Price was partly a longtime obsession with the theme of a deal with the devil (probably from working in Hollywood for so long), and partly the very sad death of the baby daughter of a friend, which got me thinking about the lengths to which we would go to save a loved one. Of course we say we’d do anything, anything at all – but what does that really mean, when it’s time to sign on the bottom line? And is it necessarily a good thing?

And my third novel, The Unseen, will be coming out in June of 2009 – it's a mystery/thriller based on the real-life parapsychology experiments done at Duke University in the 1960's.

And I have a story I like very much in the new The Darker Mask anthology of noir superhero stories. You can see the trailers and read excerpts here.

The Harrowing was nominated for a Bram Stoker Award for Superior Achievement in a First Novel. How does that make you feel as an author? Has the nomination been a good marketing tool?

It was a huge honor, and especially thrilling to be nominated for the Stoker for Best First Horror and the Anthony for Best First Mystery, because my intention is always to cross mystery and the supernatural. So the dual nomination made me feel I'd succeeded in that quest.

The nominations certainly got me a lot of attention, and I think the Stoker turned out to be particularly good for marketing because of the power of Bram Stoker's name, and the kind of elegant horror it conveys. And of course the recognition was a lovely entrée to the mystery and horror communities.

How long does it take you to write a novel? Do you outline the full plot first?

How long is a hard question to answer because an author always has another full-time job – which is book promotion. But it seems to take me about six months, non-stop, writing every day. And yes, I do extensive, 70 or 80 page outlines. Unfortunately I like complex stories so it's essential for me to map out the twists and turns and red herrings along the way.

And I’m a structure fanatic – I’m currently writing a very in-depth series of blogs on the process.

How was your experience in looking for an agent and/or publisher? Would you offer some advice to fledgling authors?

My experience was completely atypical – since I've worked as a screenwriter for a long time, all I had to do was give The Harrowing to my film agent, he gave it to a book acquisitions agent at the agency, and she passed it on to several good literary agents in New York. I had a great agent within a week and a two-book deal from St. Martin's within the month. But I paid my dues in the Hollywood trenches!

I have lots of advice on seeking representation – here are two blog posts I've compiled on the subject, with links to other essential resources: here and here.

What do you do on Halloween?

These days I always have a book signing event! Because of what I write, I'll never have a Halloween to myself again. At least I can still dress up.

I’m always happy to answer questions and dialogue on my blog.