"My main challenge, I guess, is to figure out what rhymes with cinnamon."

This month's featured artist was born Charles Thompson IV, but has assumed a stage name for most of his career in music. As a member of the Pixies, an alternative rock band whose music was heavily influenced by the punk and surfer genres, he was known as Black Francis. When the group dissolved after nine years, five studio albums, and twelve singles, one persona gave way to another and Black Francis became Frank Black.

Before his October 30 show at the House of Blues in Cleveland, Ohio, the singer/song-writer known as Frank Black sat down with me on his tour bus to discuss his music, life on the road, and the possibility of getting some new music from the Pixies.

The lyrics of some of your songs are sort of odd, and some might say controversial, Incest? Biblical violence? Los Angeles? Where do the ideas come from?

Well… I don't know. My main challenge, I guess, is to figure out what rhymes with cinnamon. You know what I'm saying? Or any word – pick a word. That's the level I'm working and the songs come out the way they come out. Some of them are real friendly sounding and some of them are real scary sounding.

At the end of the day, it's entertainment and it's about rhyming words with other words, playing word games, being cryptic, and sometimes not being cryptic. Sometimes it's disguising what you really want to sing about. Sometimes it's just real spontaneous without a lot of rhyme or reason to it. It's like that famous poem by Lewis Carroll, of Alice in Wonderland, ("Jabberwocky") "Twas brillig, and the slithy toves" and something or other. You know what I'm talking about? There's a lot of that going on in my music and I think in most people's music.

Fast Man Raider Man was recorded over several sessions with a wide cast of players, was it hard to stay on track so the finished product has the cohesive sound it does or did you not worry about that?

I didn't worry too much about that. I let the producers worry about it. I just wrote songs and showed up for my sessions. Usually I would book the sessions, too. I would say, 'Hey, I want to record in a couple of months. You want to set something up for me?' I would invite some musicians to come and play with me and I wouldn't worry about cohesiveness.

So you don't worry about the over-all tone of the album? 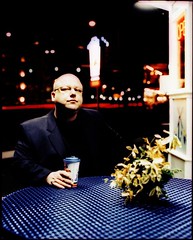 It's just a big soup is all it is. And how is this particular soup going to taste this time around. Or another simple analogy would be making a painting. Sometimes you throw lots and lots of paint up on the canvas and you can't get enough paint up there. Give me more paint, I need more paint. I need more canvas. I need more. Sometimes you're like one of those modern art painters rolling around on the canvas, and other times it's just a little line here and a little line there and you say, 'Hey, it's done.'

I don't try to plan things too much. I just try to do the best I can. I think the most important thing is that you enjoy what you're doing and not get too caught up in the music business or 'What are people going to think?' Will it be successful or will it be unsuccessful.

You can't worry about that anyway.

Right, you have no control.

The song "Los Angeles" was it Zach Galifianakis or VH1 who called and asked to use your song for Late World With Zach?

Actually, I'm not supposed to talk about that.

We worked out an arrangement to satisfy everybody. It's just one of those things where sometimes people will just use some of your music and you don't find out about it until after the fact and then you have to go back and say, 'We have to make some kind of arrangement here, because the songwriter hasn't been taken care of.'

I don't have anything negative to say about it. I'm satisfied with our understanding over the mis-usage of the track. But I didn't have anything to do with the song being used. I didn't even find out about it until the show had come and gone.

(We took a break so he could take a phone call from his wife, which was the perfect lead-in for my next question.)

I read you brought your family out on the road with you recenetly. How did that work out? Obviously they're still not out here with you.

No. I have four kids and toddler boy was not into it. He didn't like it, and was kind of stressed out. We were always changing, going to different towns, different hotel room, and we couldn't really explain it to him.

So he was constantly bumping his head and everything. He'd be running down the isle here or if we weren't looking, suddenly he'd be pressing all the buttons and all the lights would go out. He was just a lot to keep track of. Anyway, they stay at home now.

You talked about the difficulties, but did it make it easier in anyway to have them out here with you?

Oh yeah, I didn't miss my kids. My wife and I had no free time whatsoever, even though we had a nanny with us. We didn't have any time to see each other. And little baby didn't mind as long as she had her momma. She was pretty happy.

I think when the two babies are a bit older it will be okay to try again. I really did like being with them. I didn't have to worry about them. I didn't have to worry that my wife was far away. It was nice to give up all the domestic stuff… you know the stuff you do at home like taking out the trash. It was like this was our little world right here (motioning to the bus).

You were away from the normal grind, so it's sort of a vacation, even though you're working. 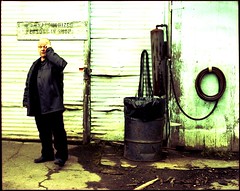 I would do it again, but I think we just have to let toddler boy get a little bigger. Of course, when toddler boy is a little older, the girl will be a toddler.

So you'll have to wait just a bit longer. Who has had the biggest influence on your life, musically or generally?

The biggest ones I always like to say are The Beatles and Bob Dylan because those are the first rock-n-roll records I listened to a lot when I was a kid. Certainly I listened to a lot of other things along the way. I like to mention Leon Russell. I like to also mention Donovan. Basically so many things influence you; it's hard to say it's this thing or that thing. Those are the ones I would say when I was real young.

They are the ones that steered you toward music?

No, I was already steered toward music. I was into music at a pretty young age. I think I was attracted to drums and things like that when I was real little, and that's what got me going.

What would be the oddest song someone might be surprised to find on your iPod/MP3 Player?

(long contemplative pause) Burl Ives, I have a lot of Burl Ives on there but not the Santa Clause stuff – the ol' folk stuff. I think some people might not expect that from me.

I think you're right.

Definitely. Have you ever been surprised by the way an audience receives a song? Like you had a really good feeling about it, but when you presented it live, the crowd reaction was luke-warm?

Well, once I hadn't played a Pixies song in some years, and I had built up such tension about it, and made a big deal. Then when I did it, it was like no big deal at all. You know? People liked it, but it was no big deal. So I'd built it all up into something it really wasn't.

Which leads me to the inevitable question, I'm sure you're getting sick of being asked about it, but we're all wondering. Is they're going to be new Pixies CD?

I don't know. I just got off the phone a little while ago, boy; I just don't know. One of the band members is a little renitent, I can't say who she is. But we're tying to coax her.

Frank Black is Blogcritics' featured artist for November. In the coming weeks we will be looking at his most recent album, Fast Man Raider Man as well as a just-released documentary about the Pixies, loudQUIETloud. Thank you to managing editor, Joan Hunt, for suggesting the question about dark lyrics and the use of "LosAngeles" on VH1.