July's featured artist, Soul Asylum has just returned to the music scene with The Silver Lining.  In a recent conversation with founding member and guitar player Dan Murphy we talked about not only how the industry has changed, but how it's effected their music as well as Karl Mueller's losing battle with throat cancer.

The Silver Lining is your first release in eight years. What was it like to come together after such a long break?

We've actually seen each other in the interim over the years. We've got together for a few shows. I've been down to New Orleans to see Dave and do some demos down there and we'd see each other maybe two or three times a year and play the odd show in Minneapolis or whatever.

But, at that point, we really needed a break. We were just pretty sick of the whole dog and pony show. It was just the whole cycle we needed a break from. We'd been doing it since the '80s – putting out records and touring just as quickly as we could. We were all physically tired and sick of each other. You lose some inspiration after awhile, like you're in that movie Groundhog Day. Every single day is exactly the same, only we never learned how to fix the cycle, unlike the movie.

In that case, who or what was it that made you decide the time was right for another Soul Asylum album?

We had, you know, four, five or six, demos we liked quite a bit. There were songs like "Oxygen" and "Slowly Rising" and a couple other things we liked and thought were strong enough material. I went down to New Orleans and did some demos acoustically with Dave in a little studio he has down there.  "Lately" and "Crazy Mixed Up World" came out of that. Then it started to seem like we were getting a record together.

We booked the studio, that was actually kind of funny. It was in Minneapolis, it was the old Flyte Tyme which used to be Jimmy Jam and Terry Lewis, and they were going out of business. They were selling the studio and we just kind of snuck in while it was on the market and recorded this record. It was really a cool way to record, because there were no distractions.

We were originally going to go in before that, but then Karl got diagnosed with cancer. It was a major set-back and none of us at the time… we new it was serious, obviously, and we knew it was life threatening, but we believed Karl would pull through. So when the initial cancer when into remission and had recovered from the chemo and the radiation, it really lit a fire under us. Karl really wanted to record, so we started as soon as he had recovered sufficiently.

It must have made it difficult to record of the second half though (after his passing)?

It really was, you know. But it was actually difficult recording the first half too. It was pretty inspiring in a way and I think Steve Hodge, who was doing the record at that point, was pretty good with Karl too.

It was just Karl was recovering and he really wanted to do it. He'd come in and be really strong and other days he would be, "Dude, I'm just too sick." You'd never know. But just the fact he was there everyday was kind of humbling in a way. What ever problems you thought you were having that day just seemed so incredibly insignificant. It was a huge dose of perspective. 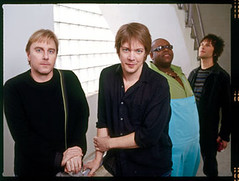 You have a reputation for your music growing and changing over the 80s and 90s. Was that a conscious effort to adapt with what was going on in the industry?

It really goes the other way. If you would quiz myself or Dave on contemporary music, we wouldn't even get on Jeopardy (Laugh). To be honest with you, it's not even because I'm lazy it's just that I don't follow it. I've never heard of hardly any of these bands.

I have a teenager, so I kind of listen to what he goes through, but it seems to change pretty quick for kids. For six months you're into Reggae and then it's pop-punk, you know, and then it's hip-hop, it's all over the place. (Pauses)

But yeah, actually when I listen to this record, it's a guitar record. It kind of reminds me of what we were trying to do sonically with the guitars with the Twin Tone and A&M records. It just seems to be really really big, loud country guitars that are recorded really well. Like Made to be Broken and While You Were Out. To me it just seems like a continuation, I think we've gotten less adolescent and what not.

The music has aged with you?

Yeah, exactly. The tempos are a little more adult, which is a good thing for the drummer who's playing for ninety minutes. (Laughs) It just seems to me like there never really was a breaking off point.

If there was really one in our career, it would be Grave Dancers'. Originally that record was going to be an acoustic one. We were just so tired of playing clubs and it was so loud, it seemed like our message was getting lost in the verbosity of the guitars. We were all having hearing problems from doing so many club tours. So that, to me, is the only record consciously put together different in our whole career.

And then we kind of chickened out on that. As you know it's not an acoustic record, but originally the demos for that "Without a Trace," "Black Gold," "The Sun Maid," all those songs were acoustic, and that's what we shopped to record labels with the first six songs.

So, was it the labels that shot your idea down?

Oh no-no-no! Everyone wanted it. At that point, everyone we talked to wanted to sign us, because everyone thought "Runaway Train" was a hit. It's kind of someone else's idea of a good time to have the industry driven by pop-hit radio. That song (Pause) I think it's a great song, but it's like an aberration I think more than something that's going to be on every record.

Has the way you're approaching marketing changed with this album from the way you've done it in the past?

I just don't know. There's all the internet stuff. I know we're going to do the Bill Maher show. We're going to California tomorrow, and I know you have to go to Amazon.com… it's a little window that pops up. There's no doubt about it, if you are a fan of a band there is so much more information out there, which is a good thing.

Marketing has never really been our bag, really. Sometimes it seems, and this may be my ego talking, but if you're record is strong enough you shouldn't have to do that much marketing. You get the songs on the radio, or be consistently good live, and hopefully word of mouth takes over. That's the way we did it originally. When we were on Twin Tone and A&M we just packed our stuff into a van and went city to city and built a following.

You mention the internet, with your myspace, and your own website and all the other aspects, does that change the way you interact with the fans?

I've been tempted to go on our Myspace and just give a little note. It was the first anniversary of Karl's passing just a few weeks ago and there have been so many really nice tributes to Karl. But, you know, I kind of try to stay out of it. I guess I don't want to be "one of those bands."

If someone comes up to me in a restaurant or after a show I'm always really polite and all that and I like to meet people who are touched by the music. But I don't think I want to be like the webmaster guy. I just don't think it's in my bones.

Do you mean the technical aspect?

No, not like that. I have a website, and I'm pretty versed in websites. I'm sure it's an old adage…I don't know. I don't know if there is any mystery left to the band, but if there is, I'd like to keep it.

In the video clip on your Myspace you dedicate "Crazy Mixed Up World" to Karl. Is there a reason behind that particular song?

I think that's actually from videospace. That was from a show at First Avenue that turned into like our EPK. I think in every city we play at some point in the show we dedicate something to Karl. I guess we still see him as our musical director.

Karl was certainly the guy in the band that had the bullshit detector and that's just a clip from what I think was the first show we played after Karl's passing. It was incredibly emotional and pretty down right scary for Dave and I. Familiarity breeds your comfort level. You get use to looking over to the guy you've always seen and it was kind of an emotional show. And that clip ended up on our EPK which ended up on our Myspace.

You know, I think if you listen to the lyrics, and the song titles, I mean "Stand Up and Be Strong" seemingly could be about Karl, even though it was all written before he got diagnosed. So it's kind of ironic in many ways, kind of the saga of the band.

What does the future hold for Soul Asylum?

To be honest with you the thing I missed in all those years was connecting with fans, playing live, and seeing their reaction. Whether it's a club in New York or a club in Chicago we have a really good fan base. I like looking into peoples facing and having that connection. When you have a good night with the crowd, there's nothing else like it.

So, that's what the future holds for me. As far as sale expectations, we made the CD pretty cheap. So if we have a couple weeks as good as the first week, then everyone is happy, everybody's recouped. We'll be fine I think. It's very Sgt. Pepper-esque, you come in and out of style.

So you're not looking toward another album yet?

Noooo! Noooo! I am so far from that place. This one had its really beautiful moments. I like recording in Minneapolis. We'd go in at noon and be out by 10 or 11 and have a really productive day. It didn't even seem like work. But with Karl passing, it's such a project. So, I think I would need a year to recoup from the emotions and kind of take inventory of where I'm at with everything. Yeah, I need to take emotional inventory.