"It gets really busy. Sometimes I just want to sleep."

Interview: Band of the Week – Emelee

From her home town of Toledo, Ohio, Emelee – this week's Band of the Week – has spent the last several years trying to get her music career of the ground. Sounds like a pretty typical story, until you hear she is only 19.

At the age of twelve she confided to her mother she wanted to be a singer. The demo tape she recorded soon after caught the attention of RJ Rice, the President of Detroit-based Barak Records. After some disappointing flirtations from some west-coast labels, she began making weekly trips from her Toledo home to Detroit to record her unique dance sound.

In her sophomore year, she left traditional school to attend a local performing arts school where she honed her craft and met two friends who still dance with her at her performances to this day. Now graduated, she has more time to dedicate to her career and often performs at dance clubs in northwest Ohio and southeast Michigan, though she is beginning to get the call to appear further away from her home base.

A few weeks ago this young dynamo sat down for a phone interview where we talked about her background, her future, her influences, and songwriting.

I read in your Myspace bio you knew you wanted to do this from the age of 12. Had you taken vocal or dance training before that?

I had a couple of voice lessons when I first started singing when I was about seven or eight, but I didn't stay with it very long. Dance… I took like one class when I was in kindergarten, besides that, no, not really.

The video you made had a lot of dancing in it. Was that hard? 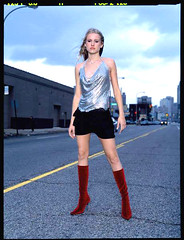 It was really fun. I've always loved dancing, but I never had the time to take lessons because I was in a lot of plays and stuff when I was younger. My sophomore year, I switched and started going to a performing arts school. They had dance classes there, and I took hip-hop dancing. It's where I met one of my dancers who's with me now when I do my shows. One of my other dancers also went to that school; he passed away in April. I had become good friends with one of his friends, and he took his place.

The video was a lot of fun, but it was a lot of work. The shoot took twelve or fourteen hours, maybe longer now that I think about it. We did half the shoot here in Toledo, and the other half in Detroit. We did the first half at the ice cream store that I work at right now. It's called Cold Fusion Creamery.

We did the first half there and it was a lot of dancing, which was hard because I'm not use to dancing with heels on. I was practicing in them in the house before, and my mom would yell at me, "Don't wear those shoes in the house!" [Laughs] It was funny. The night before we went out and practiced in the street.

Did you choreograph it or did you get a script ahead of time?

Me and my two dancers each took turns coming up with the choreography. We'd just take turns and fill in the space, and it all kind of came together.

Do you do all your own choreography for your shows, too?

Yeah, that is one of the best parts of putting on the shows.

Your website says Kiss and Tell is coming out this month and Amazon says November. Which is right?

Neither, actually. They keep changing the date. I know the business is really tricky, I've had everything in order and then something will push it back. We're shooting for November, but it could change.

This first single ("Head Over Heels") has done really well on the dance charts. Does that raise your hopes and expectations for the album?

I hope everything goes well. The single moved up six spots this week, which is the biggest jump so far. This is its fourth week on the charts and someone told me a song will usually drop on the fourth week, so I'm pretty excited about it. I didn't believe it was even on the charts until I saw the Billboard. I was like, "Uh, no way!"

Is it just the dance charts or is it crossing over?

Right now it's on the dance charts. We had a couple people do the re-mixes and they're going over real well in the dance clubs. Which is good because that's where I usually do my performances.

Where do you usually perform here in Toledo?

I did a couple shows at Club Bijou but I get calls at the last minute. I sang at Best Buy a few weeks ago. The week before that I sang at a club called Backstreet, in Detroit. I've sung in Pontiac, Michigan a couple times at a new club called Club Vision. It just depends.

But you're still staying local?

Mostly… mostly local, but I did go to New York. I was in a parade there and did a show in a club. And I did some in Texas, but I haven't had that many shows out of the Michigan/Ohio area. But we're working on it! It would make sense to go on tour when the album comes out. So I think that is what they are working on organizing.

I noticed you either wrote or co-wrote many of the songs on the album. What are some of your songwriting inspirations?

Anything that happens in life to me or my friends, or just certain issues that should be touched on. One song I wrote on the CD, "The Way I Feel," I wrote that song in the eighth grade and it's about love. I didn't know anything about love then, but at the time I thought I did. It came out pretty good, though. It worked well for me. It just depends on the mood or the day.

Do you have any songwriting heroes? Maybe someone you try to emulate? 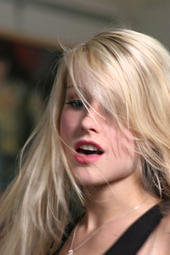 I really try to just go with my own thing, because I don't want to be put into a category. It's just not who I am.

Who are some of your favorites to listen to?

I listen to everybody. [Laughs] I can't even pick a genre. I like country, rap, R & B. I really like Alicia Keyes. I listen to her a lot. I like Gavin DeGraw. I'm just all over the place.

Do you find songwriting difficult?

It can be. I think that is pretty much true of anything. It would be really hard if someone gave me a pen and said, "Sit down and write this song." I mean, I can do it, but it won't have as much feeling. A couple times I've been at work and have been really upset about something and instead of talking I just go write a song. Those songs I think have more feeling.

Is it difficult trying to launch such a demanding career while balancing your other obligations and a social life?

It gets really busy. Sometimes I just want to sleep.

You graduated a year ago. So are you trying to balance a regular job and this one?

Yeah, yeah, it's pretty good with my job, though. I've been working there since my sophomore year, so about four years. But it's really cool because they understand about my singing, and they let me do the video shoot at their place. If I call and say, "I can't come to work. I have to go up to Detroit," they say "Okay, that's fine." A lot of places wouldn't do that.

I'm really into fashion and I really want to work at a clothing store. I like to make my own clothes and handbags and accessories and all that stuff, and that would be really fun. But I think I would get fired if I called last minute and said, "I got to go out of town for a week."

Are you hoping to branch out into fashion design?

If that's where it takes me, that would be great. If everyone likes my stuff. Right now I don't make a lot of money… well, I am getting more shows. I love shopping. I love fashion. I just like to be creative. It's just something to keep me on track and to occupy my time when I get bored.

Where do you see your career going from here?

[Laughs] Hopefully it will go up. I'm not really the five-year goal kind of person, but I hope my album comes out in November, and then we go on tour. Hopefully it goes well, God willing, there will be another single and it will go up. I really like LA, hopefully we'll be going out there.

Do you see yourself as a role model to other young girls? Does that cross your mind when you're doing your videos?

Yes and no. I want to be my own person, but at the same time, I'm a nineteen-year-old. I'm growing and exploring being a nineteen-year-old girl but I try to stay true to me. We've been offered some songs and I've been, "I'm not singing that. It's just not me."

I'm pretty wholesome person. I never got in trouble in school. I don't party. I don't drink. I don't do all that stuff that usually goes along with the music business. I'm just kind of normal. I do try to be a good role model, but I'm not going to worry about it so much it causes me to not be who I am.