Toldeo, Ohio's own Dying to Know takes time out of their practice schedule to talk about their album, their live show, their fans, and their music.

Interview: Band of the Week – Dying to Know

Toledo, Ohio might not be the first place your mind goes when you think of hotbeds of great musical talent. But there is a local music scene and for one hard rock/alternative metal band, Dying to Know, the leap from local to national act is minuscule.

Dying to Know consists of Mark McMillan on vocals, Randy Johnson on bass, Ray Wagner on Drums, and Brandon Dudek on guitar and is the result of a merge between Evolution and Hypnotic, two former local bands. With a previous EP under their belt and the April release of their first full length album, The Obvious, which is available through many online vendors as well as the local Culture Clash and any of their shows, they are looking to hit the road and see what's ahead for them outside of the city limits.

You can often hear them play at the usual area clubs, including Headliners, Club Bijou, and Howard's and they have opened for a good number of national acts in this area. The band took a little time out of their regular weekly practice to sit down with me and talk about the album, the live shows, their fan base, and above all the music.

On the left, check out a video of them doing an in-store signing and performance at Culture Clash Records.

Tell me a little bit about the band, how you guys came together and your history.

Randy: We started as two bands, Evolution and Hypnotic, then we came together and met Mark. We played a show together and it was good. So we're basically Hypnotic plus him.

Mark: Yeah we're pretty much Hypnotic plus a new vocalist, which is me. I dropped from another band, Evolution, to come play with them. They needed a new singer and I came out and auditioned. They asked me if I wanted the job and I said yeah.

Who among you is the songwriter? Or is songwriting a collaborative effort?

Ray: So, it's a group effort basically.

With the music most often coming before the lyrics?

So you have the first album out now, The Obvious and the EP. What has the response been? 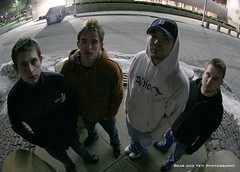 Ray: We got the CDs back in April and it's August, so four months and we've sold over 600 CDs.

And that's just selling them at your local gigs and on your myspace?

Randy: We just put a video from our set at Culture Clash.

Right, I saw that on your Myspace.

Mark: And the Godsmack one is on youtube too.

Brandon: The one that actually won us the Godsmack slot is on youtube.

Speaking of Godsmack, you've opened up for many larger names when they've played locally. What was that like?

Ray: Like all our hard work finally paid off.

Have any of those artists offered you any career advice?

Ray: They all started out the same way, you know. They've said stay hungry.

Has that experience helped expand on the good-size local following you already have?

Mark: I don't think playing with the national acts gets us fans, but I do think some of their fans haven't heard us before, and when we play in front of them they like it, but not just because we're playing with their favorite band.

That's what I meant, does the exposure add to your fan base? 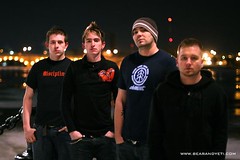 Ray: Playing with Godsmack probably doubled our fan base overnight.

Mark: It's the biggest thing that's happened to us so far.

What about Myspace and Pure Volume, what roles do these internet sites play in taking your career to the next level?

Mark: It's huge, because in order for us to tour, it costs a lot of money. For us to get fans in New York or Baltimore or somewhere in California, Myspace is a great tool because you don't have to actually play in that city.

Randy: You can share your music without a huge record label.

Ray: We have some fans in Sweden from Myspace.

The Obvious was put out on your own label? Are you looking to be signed by a major, or plan to continue the independent route?

Randy: We've been shopped to a couple labels, with some good responses. We got a couple bites, but nothing real big.

Ray: We don't want to count our chickens.

Brandon: Because then there would be talk around town.

Mark: But we have been shopped, yes. And that is the primary goal, to answer your question. And the reason why, if you want to know, is touring costs a lot of money and to be backed by a label would help with that.

Where can your fans, and our readers, hear your music and buy your CD?

Brandon: You can buy it at Culture Clash.

Ray: CD Baby, Napster and Rhapsody have it too.

What's next for Dying to Know?

Ray: Hopefully, touring. We hope to get another CD under our belt and tour.

Take it outside of Toledo?

Ray: I'd like for the next year to not be around town at all, to just get out there and be gone.

I don't think that goal is out of reach for Dying to Know. With an ever-growing fan base, a strong and powerful album under their belt, and a highly energetic stage show, these young men have all the pieces to the puzzle to break free from the local scene and score in the big time.

For information on the band, dates for their live shows, streaming MP3s, and to purchase The Obvious visit their myspace page.