In His Learned Opinion, Movies Suck 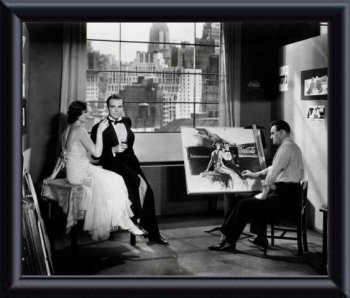 Note this engrossing and perspective-jarring examination of the film medium by playwright S.N. Behrman in the New Republic … from 1917. He examines the cinematic treatment given the play The Easiest Way:

In the play–a study of a pretty, nondescript, weak woman–we have the story of Laura Murdock, a third-rate actress, who becomes the mistress of a rich broker, Willard Brockden, and then falls in love with a young reporter, James Madison, to whom she promises faithfulness while he goes West to “strike it rich.” But waiting in New York proves monotonous to Laura and she goes back to Brockden. Brockden, quite honest according to his lights, makes her promise to write to Madison that they have resumed the old relationship. This Laura has not the strength to do; she plays both men false and when they find it out they both desert her. And so she goes, simultaneously, in the language of the play, “to Rector’s and to Hell.” The play is an honest study of the genre of Pinero’s Iris, infinitely more crude, but earnestly and nervously wrought. Brockden, like Maldonado in Iris, is a fine, craggy, outstanding figure.

In the movie Brockden becomes the crassest of melodrama villains, a mere sneak and pander, lying in wait for the until then virginal Laura, closing all avenues of livelihood for her till she is forced to break her promise to Madison. But what is less bearable is that Laura becomes a Magdalen. We are expected to water her with our tears. She is the victim of circumstances, a touching example of “what might have been.” And at the end we have a truly enlightening divergence from the original. We see Laura, as in the play, go to Rector’s. But shall she be left there, eating expensive foods and drinking rare wines? That, for an audience with a healthy respect for material comfort, would be too decidedly “coming out right.” So this is what happens: we accompany Laura to Rector’s and see her sit down at a laden table in that alluring refectory. Presently comes a Fat Person in immaculate dress who offers to take her home in his limousine. The indefatigable director takes you inside the limousine and you see the sensitive Laura struggling from the embrace of the amorous Croesus. But he persists and Magdalen jumps out of the moving machine only to jump a moment later into a convenient lake. She is pulled out and taken to the hospital, where the next day Madison finds her. Only when she dies a treacly death in his arms is the audience satisfied. For the wages of sin is not dancing and champagne at Rector’s, but inexorably death. It is one of the canons of movie morality that no woman can have relations with a man outside of wedlock without coming, sooner or later, as a direct result of her delinquency, to some dire fate, preferably death.

….Since the movie moralist knows no alternatives for his protagonists other than death or beatitude it follows that his characters must be drawn in blacks and whites–to comport with an elementary logic they must be saints or devils. Otherwise they will not merit the fates in store for them. So vanishes from the films all nuance, all complexity, all delineation. To an audience still in the Nick Carter stage of literary appreciation this is vastly agreeable. Movie-goers want their characters stark, unmodified, villainy and heroism undiluted. What happened to Brockden in The Easiest Way happens always. Paid in Full, an earlier play of Mr. Walter’s, is rememberable for Capt. Williams, a characterization as salient as that of Brockden. In the movie the whole emphasis of the story was shifted to make of Williams a debauched and lecherous scoundrel. The same thing happens to the husband in Echegaray’s Gossip, a variant of which I saw recently.

The “unhappy” ending serves the movie men well in another direction also. It justifies all sorts of licentiousness in the body of the story. The movies are endlessly preoccupied with sex. Even Peer Gynt became in the movies — to quote the producer — “a series of love-episodes with five different types of the world’s most beautiful women.” One of the five different types turned out to be quite surprisingly an agent of the secret service on Peer’s trail for slaving! Anitra, whom Peer describes as angular and dirty was, I remember, as immaculate as Phoebe Snow and as plump as a Winter Garden show-girl. Such maudlinizing of life and of art is the more to be regretted as it stunts the development of a medium that might otherwise be finely expressive.

Somehow fittingly, by the 1930s Behrman was seduced by the siren call of the cinema himself (Barton Fink?), and began screenwriting and “dialogue adaptation” for films such as Garbo’s Anna Karenina, Gary Cooper’s The Cowboy and the Lady, and director Mervyn LeRoy’s Quo Vadis.